Cancer May Keep Him From Seeing His Friends Ever Again | Milaap
loans added to your basket
Total : 0
Pay Now

Cancer May Keep Him From Seeing His Friends Ever Again

"Last week we told him that his uniforms are not ready and he can go to school the next week. Now he thinks we have not paid the fees and he is angry with us. He keeps asking why he has to be at home all the time when his sister is going to school. We have no strength to tell him that he has cancer. For the next one year, he'll be confined to hospital, " - Kokila, Mother of 6-year-old Dhanush

Cancer relapses for 1 in 10 children, it was no more just a statistic for this family

Dhanush was diagnosed with cancer when he was 2-years-old. He endured 3 long years of pain and treatment. He had multiple rounds of chemotherapy and finally conquered it. He was so excited to start school. He made new friends every day, his hair was growing back and he was a little ball of energy. His monthly checkup results were normal. It was just a month back, he got a swelling in his neck - his parents knew what it was, but they were desperately hoping that doctors tell them that it is normal. Doctors had warned them that cancer relapse happens to 1 in 10 children. It was no more just a statistic for them.


"He asks us why are we taking him to hospital often. He laughs when he meets his old friends - nurses and ward boys but he screams when he gets injections. We decided to shave his hair instead of letting it fall in lumps during chemo. He was crying because he think his friends would make fun of him. How can I tell him that he can't go to school for 1 year?" - Kokila

Not taking a small pill can have big consequences

Except for his shaven head, Dhanush has no signs of cancer but his condition is more critical than it looks. He needs intensive chemo, antibiotics and pills. It is still not enough, he needs a bone marrow transplant too. He cannot afford to miss any of the pills because his cancer has the potential to spread rapidly and turn fatal any moment. But Dhanush is too small to understand any of this.


"We have to force feed and beg him to take tablets. It hurts to see him crying all day and begging us to send him to school but we are helpless. I wish we get through this hell soon," - Kokila

We're struggling to get through every single day

Ramaraj is a daily wager, he's a farmer in his village Alanganallur, near Madurai. He gets work only when there is rainfall. He has been struggling to make the ends meet and after Dhanush's diagnosis, it became extremely difficult. He has been borrowing money even for meals. He needs 11 lakhs for the treatment. Without any help, he will lose his son to deadly cancer.


"I haven't paid back the money I borrowed for his first treatment. I do not know whom to ask for help anymore. I do not have money to even buy food and medicines. I'm counting on only on your help, please help me save my son," - Ramaraj

With your contribution, Dhanush can fight cancer and go back to school 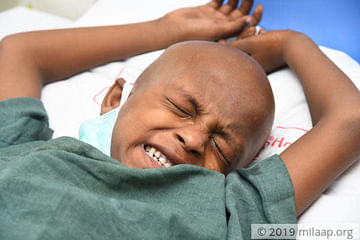 Not Taking A Small Pill Can Have Big Consequences, He Needs To Continue Treatment To Survive

His father is still in debt after his first treatment. He needs your help.