This Flower Seller Struggles To Save Her Son's Life After A Near-Fatal Accident | Milaap
loans added to your basket
Total : 0
Pay Now

“He’s my only son. They say we were lucky to have been able to even save his life. I should be grateful, I know. But I can’t see him in this state. His hip is broken; damage has been done to the brain. We don’t know how long he’s going to lay there, speechless and motionless. I am scared for Valarmathy. She is 6 months pregnant. She needs strength, but refuses to eat. She hardly sleeps. I am worried she might catch an infection, living in the hospital during her pregnancy!" – Uma, mother.

It was a normal day for a 27-year-old Dandapani who was returning home, riding pillion. There had been a wedding the previous night, after which his family returned home. Dandapani however, started home the next day. That fateful day, due to a pit unnoticed, Dandapani met with an accident. Having crashed his head onto the divider, he suffered serious blood loss. When he was rushed to the hospital, he had a broken hip and a severe head injury. He’s been in the ICU for over a month now. His poor mother and wife are struggling to save him.

“He said he’ll be there throughout my pregnancy! He did not keep his promise. But it doesn’t matter. Now, all I want is for him to at least be there to see our child, to lift him, to name him!” - Valarmathy, wife

Valarmathy refuses to go home without him, despite her pregnancy

“It’s been close to a month since his accident; since I last spoke to him. You know? Ours was a love marriage. We got married when I was 19 and he was 24. He’s all I’ve had. Not a day has gone by where I did not talk to him. He’s a great husband, and an even greater father. Our son doesn't understand what's going on. He just keeps crying all day. My hands and legs refuse to function without him around. I am fighting the urge to give up, all for the sake of the baby I’m carrying!” – Valarmathy.

Valarmathy refuses to leave the hospital. She has been there since a month, and says she will go back only once her husband has recovered. All she wants is for him to wake up.

His mother is the sole earning member of the family now

Dandapani worked at a two-wheeler battery shop that fetched him Rs. 10,000 per month till he met with an accident. Now, his mother Uma is the only earning member of the family. She works as a flower vendor at Koyambedu for a daily wage of 400-500. Ever since Dandapani has been admitted in the hospital, she’s hardly been able to work. Whatever meagre savings they had, have all been spent on his treatment so far. The expenses have pushed them into a very helpless situation, and they are struggling to raise funds to save him.


Valarmathy and Uma have borrowed money from everyone they know. With no income and no support, they have no means to afford the 25 lakhs needed for his treatment.

"I come from a family of fishermen. All our relatives are vendors who work for daily wages. There’s no way we’ll be able to gather the funds. Is that it? I can’t lose my husband just yet! He’s my life, our life! With him gone, I have no purpose here. Please help me save him. He’s only 27. We were a happy family! So happy! Please help us save him! He has to be there when our child is born!” - Valarmathy

At 27, Dandapani is fighting for his life. His family is struggling to keep him alive. Your generous contribution will help save a family! 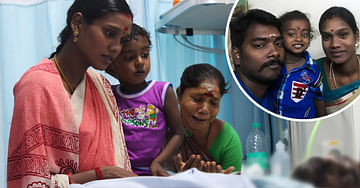 He Needs To Stay In The ICU For Longer, But His Family Can't Afford It

At 27, Dandapani is fighting for his life. His family is struggling to keep him alive.