On The Day Of Her 12th Exams, Maid's Daughter Is In The ICU With Only Few Hours Left To Get A Liver Transplant | Milaap
loans added to your basket
Total : 0
Pay Now

On The Day Of Her 12th Exams, Maid's Daughter Is In The ICU With Only Few Hours Left To Get A Liver Transplant

“Sravanthi said she will stay up all night and study, since it was Mahashivaratri. A few hours in, she started screaming, flinging things around, and being so violent that it felt like watching Rudra Tandava." - Savithramma

19-year-old Sravanthi had jaundice. Despite the weakness, she was determined to work hard for her 12th board exams. Unfortunately, on the day she had to write the exam, Sravanthi lies in the ICU, unconscious, in need of a liver transplant. She has just a few hours left on the clock and her parents worry that they might have to watch her die.

Sravanthi is one of those students who always had to work extremely hard on exams. She has the passion and drive to achieve, and always works hard. Luck failed her last year when she failed one of the subjects. It meant she could not go to college. Her father is a guard, and her mother, a maid. She wanted to be the first graduate in the family, and help alleviate their pain.

“6 months ago, she complained of vision problems. The doctor gave glasses. He said it is because she was reading too much. The glasses did not help. It just got worse until we heard it is tuberculosis.” - Ramaswamy

She kept running from her desk to the bathroom every hour

For the past two months, Sravanthi has been vomiting every day, after every meal. There is blood in her urine. The local doctors told the family that these were the side-effects of her TB medicine. However, when she collapsed a week ago, they realized that her liver is completely damaged.

“Children just need a reason to escape studies and exam. Sravanthi was not like that. She always kept saying she wants to study and get a job so my husband and I won’t have to struggle so much. Today, Sravanthi was going to be one step closer to that dream. Instead, she is in the ICU.” - Savithramma

He watches other students at college every day hoping someday, his daughter will make it

Sravanthi’s father Ramaswamy works as a security guard for a private college in Vikarabad, Telangana. He barely earns Rs 5200 per month. Savithramma is a maid who earns Rs 1000 per month. They also have a son Shivakumar who is deaf and mute. With their little income, these parents struggled to give their children a decent life. They never thought that someday, they might need several lifetimes of income to save their child.


“I was even ready to sell my house to save my daughter but we would have been homeless, and won't have money left even for rent. My friends were kind enough to give me Rs 4 lakhs for the transplant. Even that isn’t enough. My daughter does not have time for us to apply for government grants. If I save her, I will do everything to help her write the supplementary exams this year itself.” - Ramaswamy, father

All Sravanthi wanted was to clear her 12th board exams. There is only a few hours left for her surgery. You can help Sravanthi survive and follow her dream. 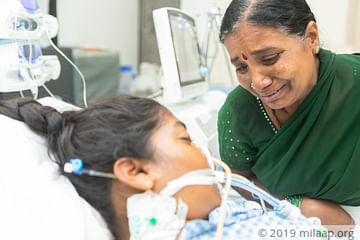 She wanted to clear her 12th board exams and go to college, but now she's dying

Because of tuberculosis and jaundice, Sravanthi's liver is damaged and needs urgent liver transplant