This 1-Month-Old Who Couldn’t Cry At Birth Because Of His Failing Heart Needs An Urgent Surgery | Milaap
loans added to your basket
Total : 0
Pay Now

DD
You are sending a message to
Dr Dhananjay
Go back

Shares
Shares
Share on whatsapp
Minutes after Bunty and Naveen’s baby boy was born on 9th February, he was rushed to the ambulance waiting outside the hospital. He didn’t cry at birth – a dangerous, unhealthy sign in newborns. As he struggled to breathe, he had to be taken from Neemrana to the NICU in Jaipur.

“I was worried that I would lose him even before he could reach the hospital. He just lay still in the ambulance the entire time. We heard his first cry 8 hours later, but we couldn’t be relieved. We found out that he has two holes in his little heart.” – Naveen, father

Bunty could only see her baby 1 week after his birth

While her baby was being taken to a hospital far away, Bunty had no choice to but to stay back in Neemrana. She was still recovering from the delivery.

“That one week was the most difficult time for me. I kept wondering what was happening to him, I hadn’t even held him and he was taken away from me. “ – Bunty, mother

The 1-month-old was in the NICU on oxygen support for 15 days before he could breathe on his own again. However, his parents couldn’t breathe a sigh of relief – their son has a heart disease due to which there’s less blood flow to the lungs and only surgery can save him. He needs it in less than a month.

The village panchayat helped them with the treatment so far, but it’s not enough for surgery

Bunty and Naveen have taken their baby home with a heavy heart. They don’t have the means to afford his surgery. Naveen is a truck driver near a village in Neemrana and earns Rs. 8,000 per month. He was able to afford his baby’s treatment so far with help from his village panchayat.

“They gave me Rs. 80,000 to get my baby treated, that’s more than they could manage. Now I have no one else to turn to for help. I have two children to feed as well, but no money." - Naveen

The baby boy cries often and his lips and fingers turn blue every time he does. He hardly drinks any milk and is spending every minute in pain. He is getting weaker and only you can help him.

The baby is running out of time and has less than 1 month to get the heart surgery. Naveen and Bunty fine themselves at a dead-end and can’t save their baby without your help.

The specifics of this case have been verified by the medical team at the concerned hospital. For any clarification on the treatment or associated costs, contact the campaign organizer or the medical team.
Click here to save Bunty's baby
Donate 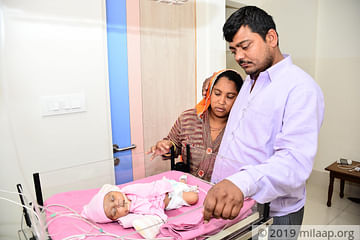 Their Village Panchayat Helped Them With Treatment So Far, But It's Not Enough To Save Their Baby

Bunty and Naveen's baby boy needs a heart surgery at the earliest to survive.

UPI: givetonaveenkumarfund1@yesbankltd (Copy to clipboard)
Or
Click here to read the instructions before you make a bank transfer.