Lakshmi Is Struggling All Alone To Save Her 5-Year-Old From Cancer | Milaap
loans added to your basket
Total : 0
Pay Now

DK
You are sending a message to
Dasari Kameswararao
Go back

Shares
Shares
Share on whatsapp
5-year-old Kalyanram is an active, bright child – until he was diagnosed with blood cancer.  He needs to undergo 3 years of intensive chemotherapy. He will need frequent blood transfusions and intravenous antibiotics.

Kalyanram was born perfectly healthy but it did not last for a very long time. When he was just two years old he stopped eating and with whatever little food he has taken, his stomach became very hard in few minutes. He was taken to a local hospital in Nellore. Medicines did not help him. His condition became worse then he could not walk or run. He stopped playing and found tired always.

Eventually Kalyan complained about severe throat pain. He was again taken to a local hospital. After the blood tests, parents were told that his platelet count was very low and he needed to take medications. They continued with the medications and his condition became worse day by day.

Then he was taken to a hospital in Chennai. After a series of tests they were given the terrible news that the 5-year-old has blood cancer. His mother Lakshmi Swathy was totally shattered. She knew something was wrong but she was not prepared at all to hear those words.

For the past 6 months, Lakshmi has been living in Chennai for Kalyan’s treatment. She does not understand the language and finds it hard to communicate with people. She has rented out a room and is paying Rs 6,000 per month.  Her husband Kameshwar is also sick. He has high sugar and blood pressure. He has to take dialysis every day and is admitted to the hospital in Nellore.

Kalyan doesn't know why he is in the hospital, he cries every day to go back home and play with his sister

“My son and my husband, the two most important people in my life are battling for their lives. This is the worst phase of our life. I desperately hope that we overcome this pain and trauma”

Feeling hopeless, Kameshwar hardly talks to anyone. Lakshmi is really scared that he might be depressed. Kameshwar lost his parents at young age and he has no one to stay with him now. Lakshmi’s mother is taking care of their 4-year-old daughter Vinodhana and is too old to be with Kameshwar.

Kalyanram is very close to his sister. The brother and sister both cry to be together, but both are too young to understand. Kalyanram is an intelligent child too, he has scored 300/300 in the last quarterly exam. Unfortunately, his parents are not in a situation to feel proud about his marks, they cannot think anything beyond his health and future.

“My husband feels guilty for not being with us. I’m concerned about his health also. I tell him we are doing well and he is recovering. I'm crying everyday in silence"

If he is given treatment now, he can live a normal life like any other boys of his age

Kameshwar works as an assistant in a polytechnic college and earns Rs 9,000 per month. He has been forced to quit because of his health. The family has no source of income now. They have already borrowed heavily for his treatment and other expense for an interest rate of 5%. Kalyanram needs to undergo chemotherapy for 3 more years and that requires Rs 8-10 lakhs which is beyond their means. He has a good chance of recovering if treated without any delay and continuously for next 3 years. Only your contributions can save Lakshmi’s son. 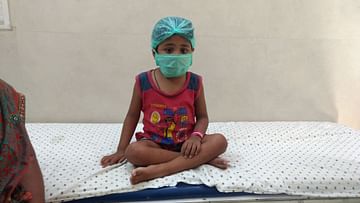 Kalyan has a very good chance of getting better, but his parents cannot afford the treatment.