Bayareddy's every breath is painful and his body is failing for lack of oxygen | Milaap
loans added to your basket
Total : 0
Pay Now

Shares
Shares
Share on whatsapp
Bayareddy is a 54-year-old man with an enlarged heart. His heart is unable to pump enough blood which can lead to complications like his lungs filling with fluid and even heart failure. His condition is really bad and he needs a heart transplant at the earliest.

Bayareddy worked night and day for his family

Bayareddy worked as a driver and transported cargo. His job took him away from home for days and he often worked overnight. It was tough, gruelling work, but it helped him keep a roof over his family and even get his son a good education – something he never got. He made sure his son Harish went to good 'private' colleges.
Bayareddy at home. His condition is getting worse every day
While it created opportunities for him, Harish believes that this is what caused so much strain on Bayareddy's heart. In 2012, a few years before Harish finished his BCom., Bayareddy's heart began to give up. He could not continue to work because of the strain.

“I couldn't breathe and I started getting dizzy. How could I drive? I took medicines regularly and we used our savings to pay Harish's fees. He got a job four months back. I am a completely useless man right now,” Bayareddy says.

Harish completed his education and is finally feeling capable of helping his father but he is worried it might be too late. He is seeing his father deteriorate. From being the charming, streetsmart person that he was, Bayareddy is now too tired to even speak.
Bayareddy at the hospital

“He can't breathe and gets very tired. We had to admit him to a hospital to remove accumulated fluid in his lungs. Unless he gets a new heart – this will keep happening. The doctors say a heart transplant is the only way to save him now. Pills are not enough,” Harish says.

The family has always struggled from a lack of funds

Despite the hard work he put in, Bayareddy made only Rs 10,000 from his job. There was never a time when there was enough money, but the family managed because of Bayareddy's faith that things would one day get better. But when crisis struck – the situation became really difficult.
Bayareddy with Harish and his wife Bayamma at home
After his diagnosis, Bayareddy hasn't worked. The family's savings – meagre as they were – have depleted. With Harish getting a new job, the family's incomes are restored but they are in no position to get Bayareddy the heart transplant he needs to live.
His family feels that they have no choice but to see Bayareddy suffer. With his condition becoming worse they wonder if they will be able to save him. “My father is my guide. No matter where I am in life – his reassuring presence gives me strength to go on. Without him, we will be very lost,” Harish says.

You can help this family save its cornerstone

Bayareddy has given his youth and health to the welfare of his wife and son. Now, they want to do something for him and help him live the rest of his life comfortably. A heart transplant will allow Bayareddy to breathe, and live a comfortable life. Your contribution will help this desperate family save him.

The specifics of this case have been verified by the medical team at the concerned hospital. For any clarification on the treatment or associated costs, contact the campaign organizer or the medical team.
Click here to contribute and give Bayareddy a chance to live.
Donate 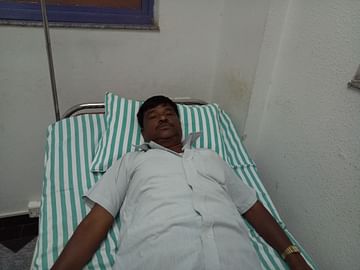 Help Bayyareddy get a heart transplant

Bayareddy is very tired and in pain because of his heart condition. Your help will let him get a...