If I Leave This Time I Fear I Won’t See Him Alive, I Can't Save Him From Cancer On My Own | Milaap
loans added to your basket
Total : 0
Pay Now

If I Leave This Time I Fear I Won’t See Him Alive, I Can't Save Him From Cancer On My Own

Shares
Shares
Share on whatsapp
Yesterday morning, Badal’s (9) condition deteriorated. He was rushed to the ICU, with a dangerously low blood count. His fever is fluctuating. He’s barely awake and needs oxygen support to breathe. All this happened in just a few hours. Vikas and Bulbul are devastated.

“Can you hear that? That beeping sound is from the machine that’s keeping him alive. All this is because of his cancer, he’s very critical now. Whenever he asked me what was wrong with him, I told him it was a blood infection and that he’ll be fine soon. But now…” – Vikas, father

Vikas will have no option but to leave his sick child behind to go back to Bihar soon. He has to look for a way to arrange for more funds to continue his son’s treatment. But he knows, that even all the begging and borrowing in the world won’t be enough if he doesn’t get help soon.

A summer of pain and suffering

Badal was supposed to go to class 5 this year. His summer holidays were supposed to be filled with fun and laughter. Instead, Badal was diagnosed with blood cancer after recurring fever. He has been in the hospital in Kolkata since April. His childhood, happiness – all gone.

“You know, he’s a very bright student. All the teachers tell me. He reads English so well…that’s how he found out he has cancer. He read the boards in the hospital. We thought we wouldn’t tell him..” – Vikas

Vikas remembers exactly how many days it’s been – 4 months and 13 days. Over 4 months of suffering and pain for his little son, and his fight still isn’t over. Badal needs chemotherapy for the next few months to survive cancer.

Vikas, a school teacher, hasn’t gone for work in months

Vikas is a school teacher in Bihar. He teaches Hindi to students from class 1 to 5. However, he hasn’t been able to go to work. He has no income right now. He has exhausted everything he borrowed from his family. They have spent 5 lakhs till now, 8 more lakhs is impossible for them to arrange.

“He has become so weak, watching him in the ICU now is heartbreaking. He’s really trying his best to stay strong, to make it through this. They say he will make it through…only if we find a way to continue his treatment.”

Badal needs continued chemotherapy to survive. You can help him get the treatment he needs and go home healthy. 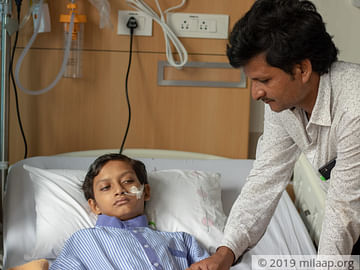 Badal Is Critical, He Needs Your Help At The Earliest

Unfortunately, Vikas just can't afford his treatment any longer. He needs your help.