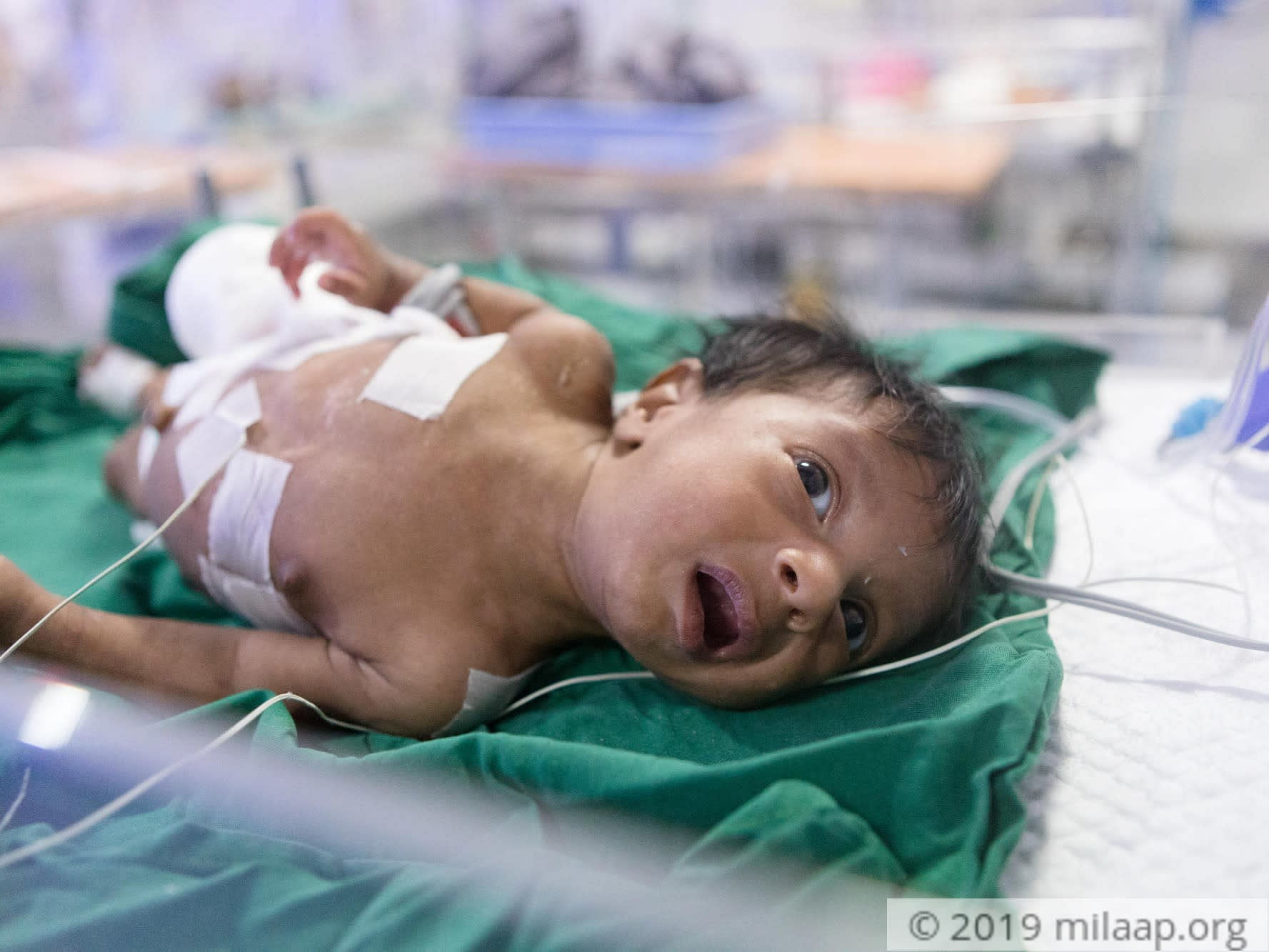 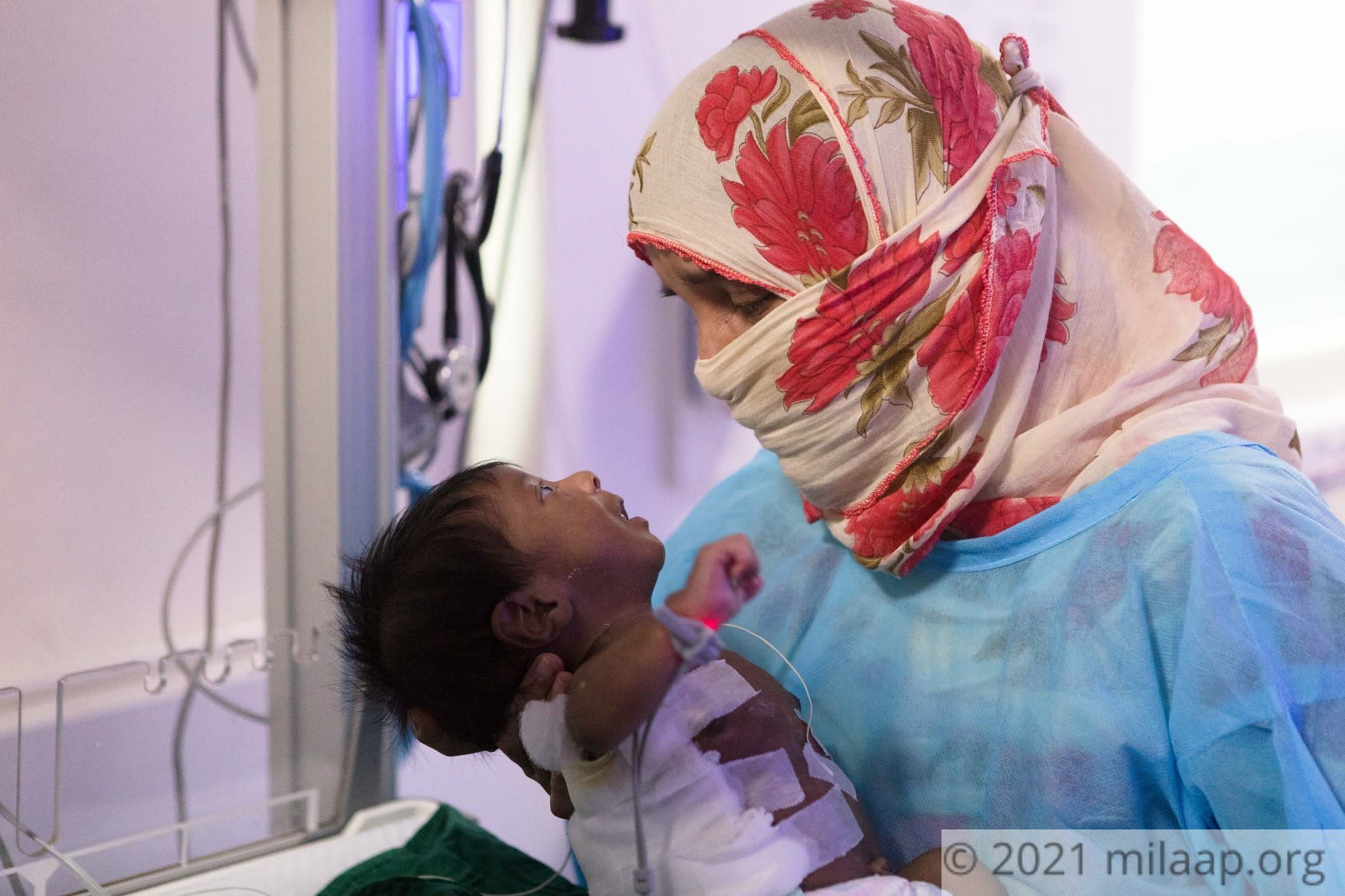 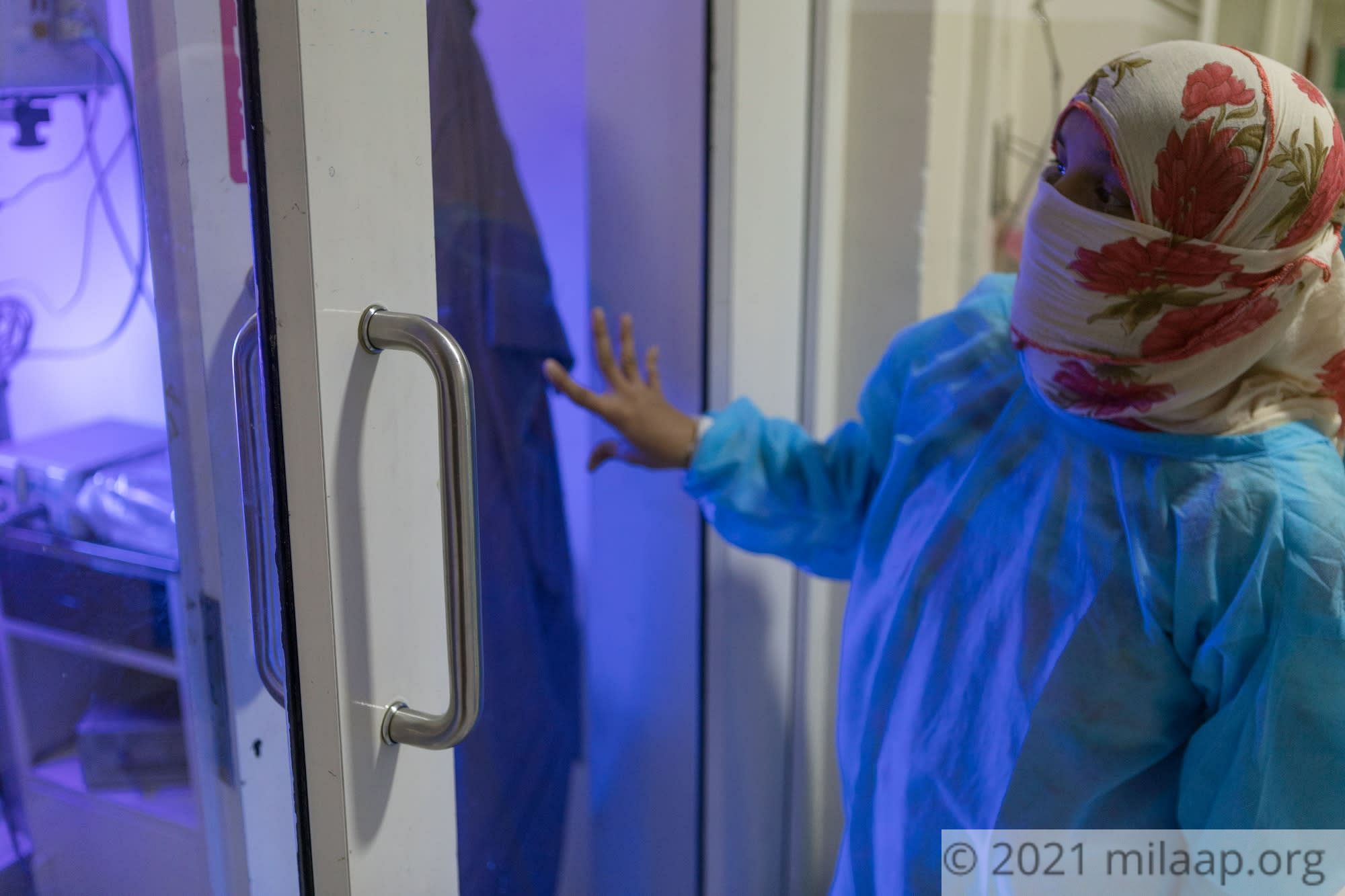 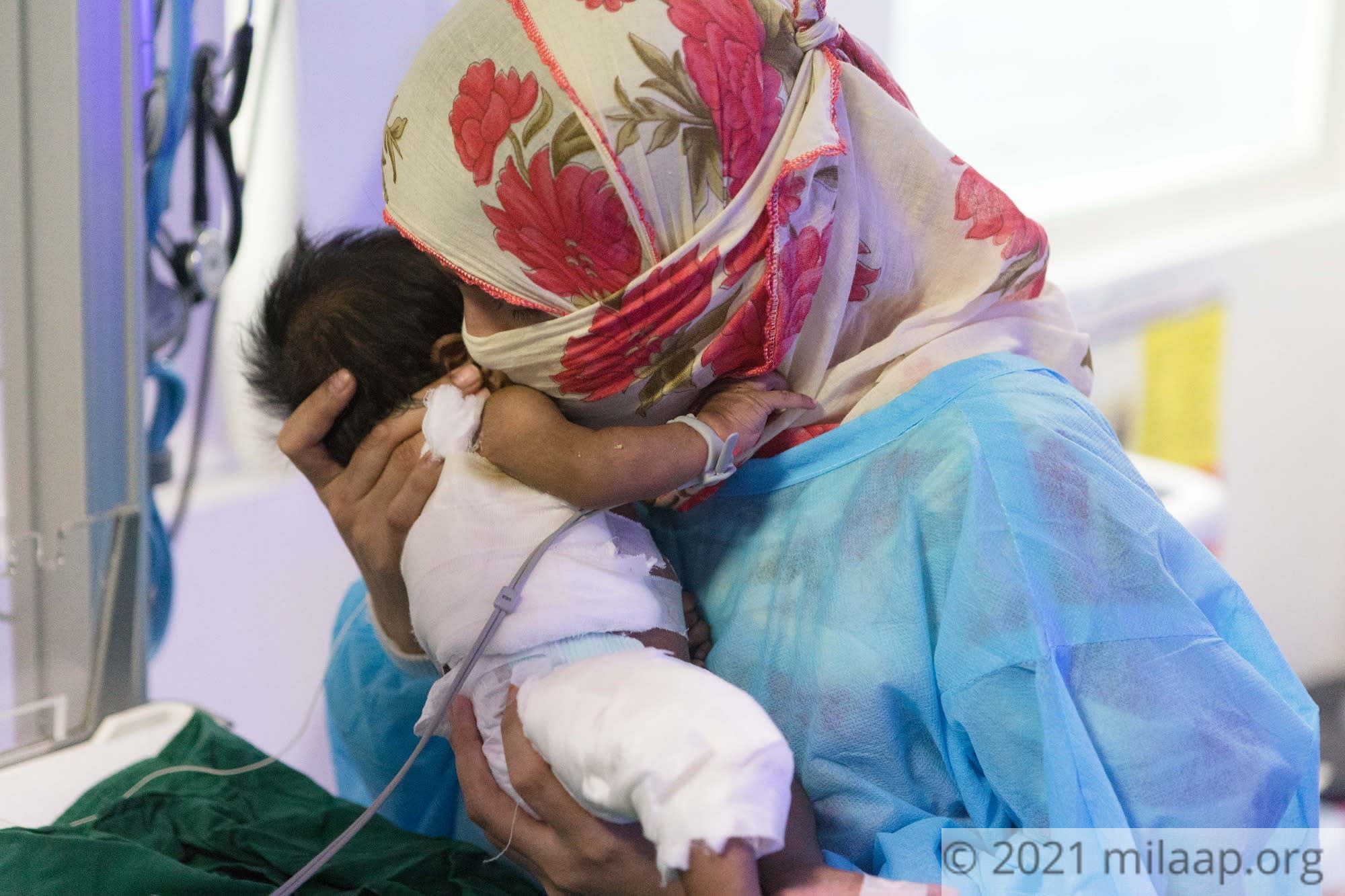 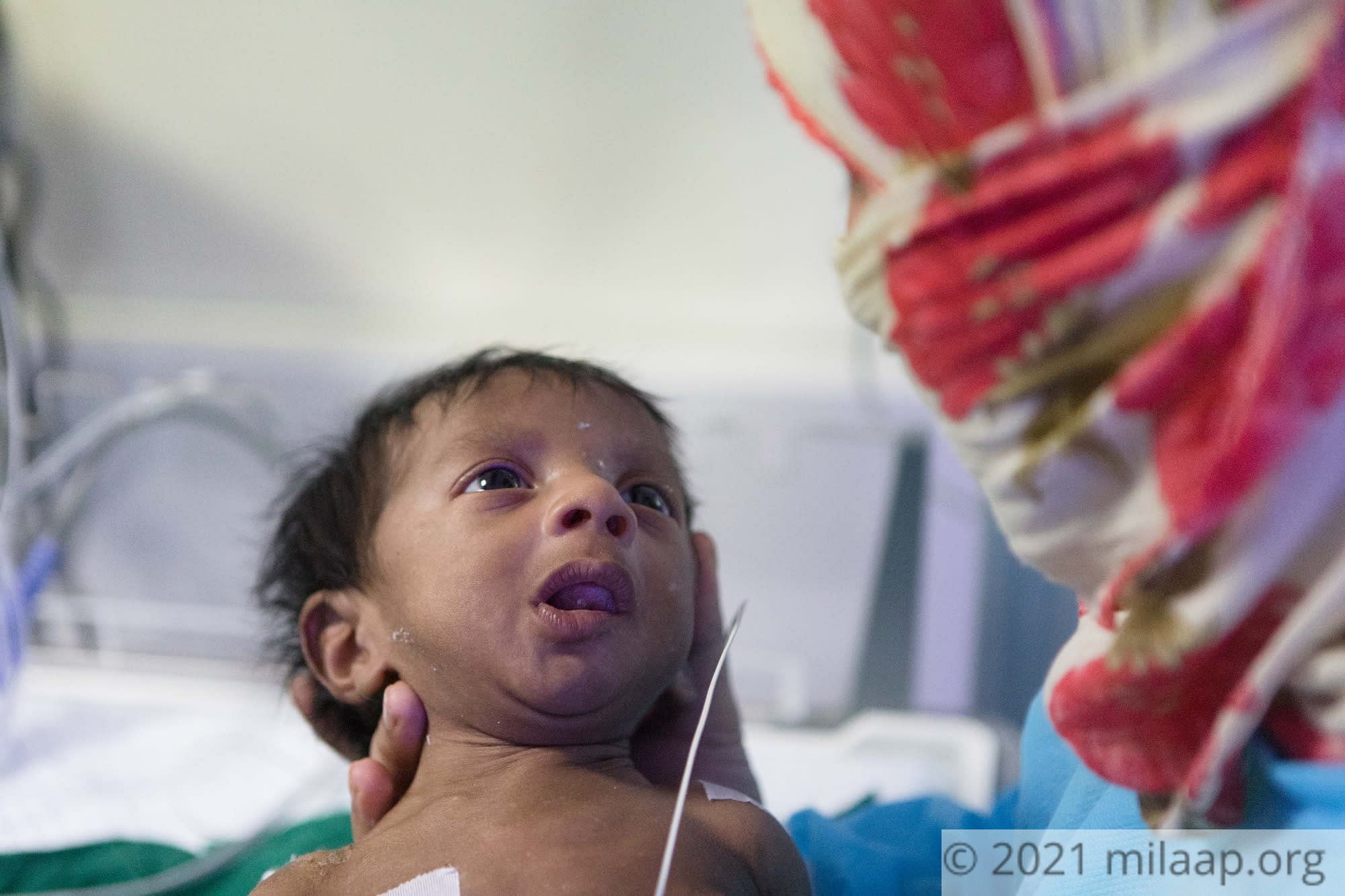 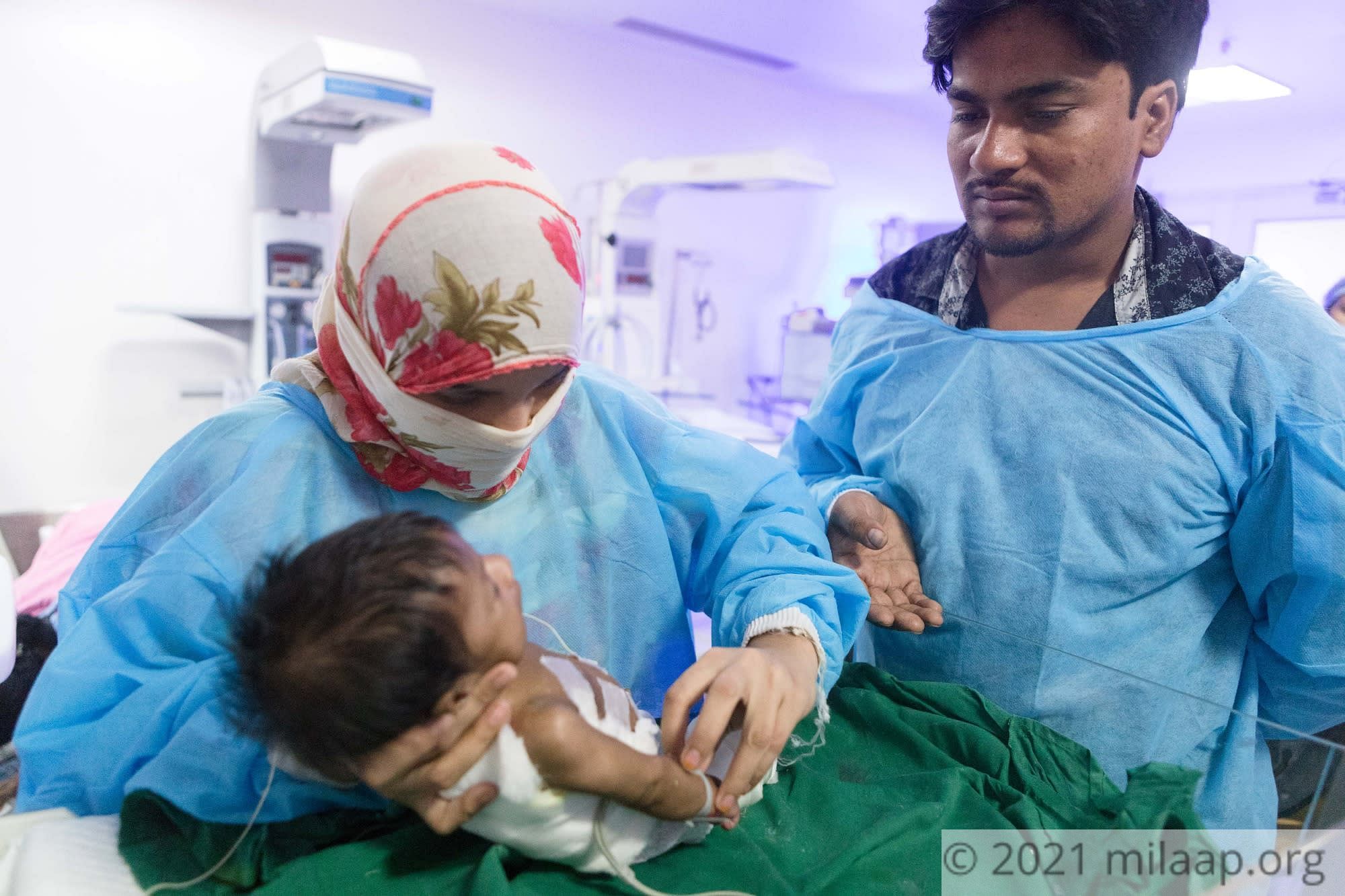 Share
I had never been more horrified or terrified than that day. The doctors had warned us that they would have to remove most of the infected skin, but… we never imagined…
When my baby came back from the surgery, the skin on nearly half of his back was gone, and we could see the flesh underneath…
– Arshiya, mother

They only got 10 days of happiness with their newborn

The birth of their little baby had been the happiest moment in Arshiya and Feroz’s lives. They woke every morning with a smile, and each day was magical. Every evening, when Feroz came back from working at his fruit stall, he would let Arshiya rest while he took care of their son. Things took a drastic and unexpected turn for the worse when one night their baby fell asleep, then wouldn’t wake up.

His condition deteriorated rapidly after that night

“By the time we got to the hospital, he had 2 seizures, and we noticed there was a small red patch on his back that wasn’t there before. He was immediately hospitalized and they started giving him all kinds of injections. A few days later, he woke up, but he was burning with fever and the patch just kept growing and growing. Soon it became black and got filled with pus, and then… then the skin started peeling from my baby’s back...”

NF is an extremely rare, and even more dangerous, bacterial infection. The infection starts in one spot of the skin, then spreads rapidly, eating skin and flesh along the way. It can happen to anyone, and the cause is unknown. While heavy and strict antibiotic courses are usually enough to control it, sometimes as in this case where it is too severe, doctors are forced to surgically remove the infected skin and flesh before further spread.

He survived the Necrotizing Fasciitis and the surgery that followed, but half his back is open to all kinds of infections now

“He needs to stay in the ICU for a month or so, under the doctors’ care, to make sure his back can heal before we take him home. But we’ve already spent nearly 6 lakhs so far, and that too after taking so many loans. My son needs another 14 lakhs to recover fully. I’m trying, but I can’t come up with so much! I don’t want to lose him, I can’t… I can’t…”
– Feroz, father

Their little baby has been through hell and back over the past month. Now that the worst is over, he just needs one chance to learn that all life isn't just pain and suffering. Without your generous contribution now, he'll never learn that the world can be beautiful, he'll never know joy and happiness, he'll never experience the unconditional love of his parents.