This 2-year-old Has A Disease That Is Eating Up Her Skin And Your Help Can Save Her | Milaap
loans added to your basket
Total : 0
Pay Now

Shares
Shares
Share on whatsapp
2-year-old Shanvi developed a rare disorder that was not identified for months. The illness causes terrible rashes and destroys the body's muscles. Shanvi's condition deteriorated so much that pits started forming on her skin that in some places exposed bone. Shanvi's parents are devastated to see their only child suffer. The only treatment available is too expensive for the parents to afford.

In just four months, a rash turned into a terrible scarring condition

Shanvi was always a shy child, preferring to play at home by herself with her toys. She had just started saying her first words. Before she started speaking in sentences, her rash had broken out and she stopped being able to sit on her own because her muscles are damaged.

Shanvi's parents recall the joy with which they watched each new thing she did. The thrill when she learned how to walk and the exasperation when she started dragging stools to reach places beyond her normal reach. That happiness has been horribly snatched away from them.

Her father Anoop curses his own inability to help his child. “We took her to so many doctors. None of them could tell us what was happening. First she had rashes that got worse and the doctors say her muscles are dissolving and coming from the pits on her skin. She's already unable to walk, and if we don't treat her, they say she'll lose her voice,” says Anoop in a heavy voice.

Besides the deep skin rashes, Shanvi is slowly losing the use of her hands and legs. She can't sit, walk or eat on her own. Slowly, her ability to even hold her own head will be gone if she is not treated. Anoop says that even her sweet voice comes out in spurts as her vocal cords are getting damaged. Shanvi needs treatment before that happens.

In places, Shanvi's skin is so damaged - her bone is visible

Shanvi's has a rare disorder called Dermatomyositis. The condition causes rashes and weakens and damages all muscles in the body. Shanvi's condition has deteriorated because her condition was not diagnosed in time. Her parents couldn't find a doctor who could correctly diagnose this unusual condition in their town Barabanki, UP.


Before Shanvi became sick, her father used to have a small rice shop, earning Rs 3,000-5,000 per month. When his daughter became sick – he has closed his shop to make sure they do everything to at least get his child to the doctor. He has earned nothing in the last four months.

“On days that there is some time, I only visit people – begging them for money. I know no one has any money to spare, but they still helped me. I will be grateful for any help that I get. My child's life  really is in the hands of those who have helped us till now,” Anoop says.

Shanvi's anguished parents need to get Shanvi injections worth Rs 70,000 a month for the next two years. Every time Anoop runs out of money – Shanvi's next dose of injection gets delayed and her condition gets worse. Given her already weakened condition – Shanvi cannot wait.

Contribute to help these parents save their innocent baby from suffering a terrible fate.

Click here to save Shanvi from this terrible condition. 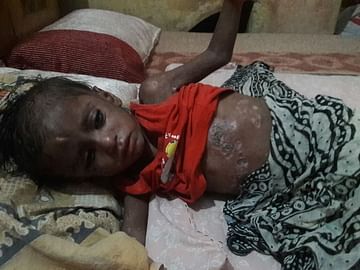 2-year-old Shanvi has a condition that is eating away at her muscles. Help buy her time.