3-Year-Old With Multiple Birth Defects Needs A Heart Surgery At The Earliest To Survive | Milaap
loans added to your basket
Total : 0
Pay Now

“We fear the night. That’s when our baby goes to sleep normally, but wakes up in between – his body becomes stiff and his fingers turn blue. We have to rub his back so that he does not go cold and rock him as he cries. He doesn’t know what sound sleep is, he’s never experienced it. His heart disease is getting worse by the minute. Without an urgent surgery, we will lose him,”-Aneesh, father of Baby Sananth

3-year-old Sananth has a hole in his heart that contributes to poor oxygen levels in his blood, which in turn makes him breathless. Of late, there has not been a day in which he didn’t suffer from either cough or cold or both. Because his heart is so weak, he is severely underweight at just 9 kg. (Normal babies at age 3 are supposed to weigh at least 11 kg).  He can have a normal life like other children if he undergoes an open heart surgery, but his lower-middle class family cannot afford it.

For first-time parents, the first 6 months of their baby’s life is the most joyful – they monitor their growth patiently and become proud when each milestone is reached. However, it was the opposite for Aneesh and Anju. Not only that their baby was not growing well, but had one health issue after another, like an endless nightmare.

“He had a hernia problem, for which he got surgery at 6 months of age. It was around that time that his heart problem was diagnosed and he underwent a surgery where a shunt was placed in his heart. After that, doctors found that he has a hole in the back of his mouth – which was worsening the cold and cough he already suffered as a result of his bad heart. Then finally, doctors told us that he has hypothyroidism also. I don’t know how my baby is surviving despite going through so much,”-Aneesh

Sadly, Baby Sananth also has many developmental delays as a result of his heart disease. At an age where normal kids speak in full sentences and have a vocabulary of at least 200 words, the only word he can say is Amma. He also cannot walk like other children his age due to his general weakness.

“We have to put him in the baby walker and push him around. He enjoys it, but his legs are weak and he can’t do even that for very long. My mother in law or I have to carry him around all day long. If he is hungry, he only conveys that through actions, my poor baby,”-Anju, mother

This mechanic who earns in thousands has spent lakhs to keep his baby alive, needs urgent help

Aneesh works as a mechanic in his hometown of Kakkanad, Kochi. He had a stable job and earned Rs 10,000 a month before his baby was born. After Sananth’s birth, Aneesh hasn’t been able to go to work regularly as his baby was almost always admitted in the hospital. Gradually, he started earning less than what he used to earn going for part-time jobs, but his expenses always exceeded his income in any case. He had to borrow more than 14 lakhs for his baby’s treatment so far – including two surgeries, medicines and hospital admission. Now he’s not able to go for work at all and is relying on his aged father (who repairs two-wheelers) to manage household expenses.

“I have already borrowed money from the villagers and everyone I know. They have helped me in every way possible, but I am in huge debt. I cannot borrow money again or I will drown in my debt. Please help me save my son,”-Aneesh

With your kind contribution, this poor child can undergo an open heart surgery – the only way his life can be saved – and live a normal life 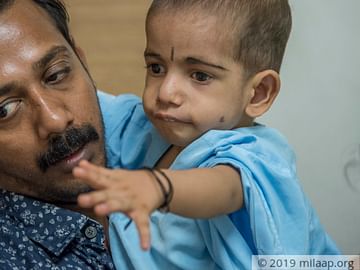 The hole in his heart is killing this poor baby slowly. He needs your help urgently.