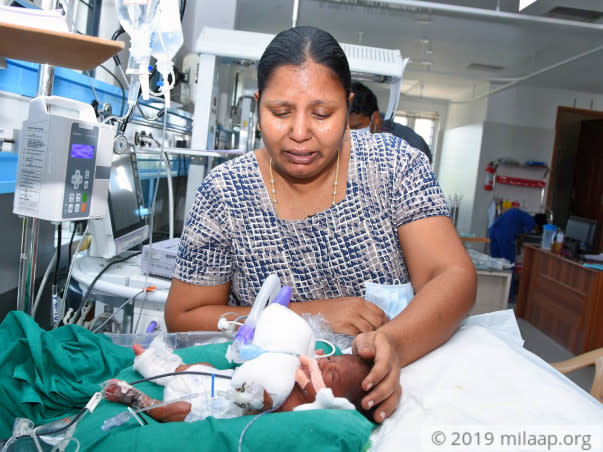 "I couldn't keep him within me for more than 30 weeks. Now I can't feed him; can't hold him whenever I want. I can't be there next to him when he sleeps - what if he has bad dreams? I haven't been able to be there for him, and the least I can do so I don't fail as a mother is, to save him; to bring him home, and keep him safe!" - Sumathi, mother.

Years ago, Sumathi and Jagadeesh had their first child, and the whole house had been lit with happiness. They promised her a baby sibling and little Judushikha was eager and ecstatic. Years later, Sumathi was pregnant again, but during her fourth month, she had to undergo abortion. Now, after three years, she has been blessed with a child who’s struggling for life.


“I was devastated when I lost the child. There had been no symptoms of complications at all. And yet, I lost him..Now, I’m afraid history might repeat itself.. Even with all my struggles put together, I haven't struggled even half as much as he has!” – Sumathi, mother.

The doctors told her that both her, and her baby's life was at risk

Three years after her abortion, Sumathi was pregnant again. But from the very beginning, she suffered bouts of complications. Her stomach couldn’t keep in any food, and her BP was fluctuating. During the 5th month of her pregnancy, she was told what she had been desperately hoping to not hear. She was advised to abort her child. Although she was given medicines, she was getting better.

“But again in the 7th month, I was told that there was no blood circulation within. Both our lives were at risk and I couldn’t believe it!  Left without a choice, I underwent a surgery and miraculously, my baby boy came out alive!” – Sumathi.

Having been born in just 30 weeks of pregnancy, the baby weighs only 730g. With his organs yet to develop, he was admitted in the NICU and kept on ventilator support. He was steadily improving, but two weeks later, his sugar level rose drastically and doctors saw that he had an infection of the blood. Soon, his stomach started swelling and an intestinal infection was suspected.

With a prolonged stay in the NICU, the baby has high chances of survival

The only way to know what was happening within, was to cut him open. A 730 gms baby of 15 days undergoing a surgery – I’d never even dreamt of. When they did, they saw there was a big hole in his intestine and it was severely infected. They treated it and he is now slowly recovering from the surgery.
But all the weight he had gained earlier, it’s all gone now. He’s starting all over again, and needs few more weeks in the NICU. He’s doing his part, by putting up a fight, but I’m afraid we won’t be able to fight for long, for we have no money left; and no source!
– Sumathi.

Despite being sick, Sumathi travels to the hospital every day

Although she had been critical herself, soon after the delivery Sumathi got herself discharged. While the treatment would have helped her, she refused, because the couple couldn’t afford it. Jagadeesh, the only earning member of their family, works as a goods delivery person and earns Rs.20,000 a month. To save their son, they need 8 lakh rupees, but they can’t afford it.

“We have sold all we owned and have borrowed from everyone we could borrow from. Our house is desolate. Our daughter hardly talks, she’s scared. My wife yearns to hold the baby in her arms; to feed him; to smother him with kisses. I am here, going from one place to another in search of funds. We just want to bring him home. We have too much hopes for someone who can’t afford his treatment. Help us, please!” – Jagadeesh, father.

They've lost a child once, and can't go through it again. With your generous contribution, these parents can take home their son, and little Judushika, her baby-brother.
BO
Patient Baby of Sumathi is 30 days old, living in Erode, Tamil Nadu
EE
Being treated by Dr. Boopathi in Erode Emergency care, Erode, Tamil Nadu