This Premature Baby Born With A Lump In His Throat Is Struggling For His Life | Milaap
loans added to your basket
Total : 0
Pay Now

“The baby is here; right next to me. I can’t carry him or shower him with kisses. I can’t take him home and celebrate his arrival. It’s still okay, I can wait. But the fact that he’s struggling to even breathe kills me. He’s too small to be fighting big battles!” – Rajeshwari.

Karthik and Rajeshwari were beyond joy when they were told they were soon going to have their first baby. All went well, and the baby was born through a normal delivery, just a week before the given due date. But as fate would have it, the baby boy was not fully developed at the time of birth. For more than two weeks now, he has been on ventilator in the NICU, with severe respiratory issues. With tubes pinned in and needles inserted, this wasn’t the welcome the parents had planned for their baby.

When the baby was born, he did not cry.  Days later, the doctors suspected a blockage of the wind-pipe. After bronchoscopy and endoscopy, among many other tests, he was diagnosed with a lump in his throat. Because the baby is not fully developed, there’s a mass from a canal pressing down on his pharynx. This also connects the nose to the respiratory tract. Because of the lump, the baby is unable to breathe on his own. Apart from the need to stay in the NICU for a few more weeks in order to fully develop, this premature baby is also on ventilator support for breathing.

“He is breathing through a tube. They tried explaining what the complications were. But it all went over our head. We don’t understand all this. They said the condition is rare and only one in a thousand suffer this. It is unfair that it had to be my boy. He’s in distress and it is too risky to postpone the surgery any longer. Everyone of us is devastated. We were supposed to be busy picking names for him. Instead, everyone’s fasting, chanting prayers non-stop. Everyone’s heart-broken. We did not see this coming.” – Karthik, Father.

The life of the baby comes with a price tag, and the parents can’t afford it

Karthik and Rajeshwari live in a joint family with his parents and his brother’s family. He works for Cafe Coffee Day – helps in transporting the supplies across the franchises. He started off with an income of Rs. 8,000 last year. Moved by his hard-work, he was recently given a raise. His brother has an ironing shop. Their earnings are barely enough for their daily survival. However, the baby’s surgery and treatment amounts to 12 lakhs and the family is helpless.

“Ours was a love marriage. It was a simple wedding at a temple with no pompous celebrations. We’ve never been ones to spend lavishly. I already am in debt and am paying for my loans. Apart from the Rs 10-20 I spend for my lunch, I make sure to save the rest. Over the past few months, all of our savings have gone into medical expenses for my wife’s pregnancy. Now, when the time has come for us to forget about all the money that has been spent and not worry about finances anymore, this is unexpected and heart-breaking.

On one side, it’s their son’s life that is so precious to the parents On the other, it’s the 12 lakh rupees that they have no hopes of gathering. They are torn between the two side. Your contribution will help save him. 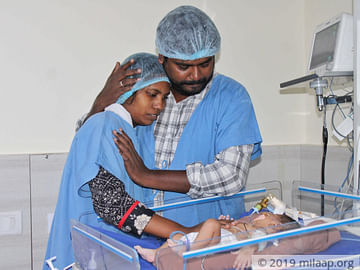 The parents are torn between worrying about the expenses and their boy's life.