This New-Born Baby Is Fighting Infections And Need Your Help To Stay Alive | Milaap
loans added to your basket
Total : 0
Pay Now

R
You are sending a message to
Reshma
Go back

That day, my worst nightmare came to life. Pragathi was rushed in for an emergency C-section. Our baby was born at 29 weeks. He was just about 1.4kgs. I can’t explain how I survived those hours while Pragathi was undergoing surgery. Every second passed felt like a year to me.

A supposed joyous occasion turned into a father's worst nightmare -- this is how Muresh describes the birth of his first child.

On the morning of June 19, 2017, his wife, Pragathi, complained of discomfort. The couple didn't think of it much however, as Pragathi was 29 weeks pregnant and morning sickness was a routine for her. That is until her water broke few hours later, and had to be rushed to the nearby hospital.

Upon reaching the hospital, the doctors concluded that the baby has to be delivered. They still tried to postpone it as premature birth is a high risk factor for both baby and the mother. On the morning of June 20, 2017, however, Pragati had to be rushed to the Operation Theatre for an emergency C-Section.
"I was so dazed with everything happening around me. For a moment I was unable to comprehend whatever the doctor was saying. They patiently took me through all the risk associated and I remember praying for the safety of both my lifelines. Thankfully, operation was a success and my wife was out of danger. But the baby had to be rushed to NICU", said the father.

"I managed to sneak a glimpse at him. He was so tiny and could not breathe on his own. The doctors explained to me that he was in sepsis. They didn't allow me to see him for more than a few seconds. They immediately wheeled him to the NICU and he has been there for a week now. He needs to be there until his organs develop completely. He could be in NICU for next 4-6 weeks. He came into this world too early and if we don't give him this time, he will lose his fight", he continued.

Pragathi is suffering at home

Pragathi was discharged from hospital a day back. While at home, she is unable to even walk. But she has to go to the hospital everyday because the baby requires to be breastfed.

"She can barely keep her eyes open for longer period of time, but she wakes up even before me to go to the hospital to feed the baby. She says that is the only chance she gets to see her baby and wouldn't miss it even if it kills her."

Muresh works in a private firm in Bangalore for a monthly salary of Rs. 17,000. He is the only earning member of the family and is finding it financially difficult to keep with with the mounting hospital dues. The family has no option but to keep their child under continuous medical support and give him time to recover and gain strength to survive. The estimated cost of entire treatment is 6 lakhs and the family is finding it difficult to arrange for the funds.

"Which father will not do everything in his power to save his child? I am trying to arrange for the funds from everywhere possible. It's just that, 6 lakhs is too much for a person with Rs. 17,000 salary to arrange, and that too in next few weeks", said Muresh.

Your support can help this father save his baby. His birth was supposed to be a happy occasion. Before they knew it, life swept them into this nightmare. Funds raised through this fundraiser will help to keep the baby alive.

The specifics of this case have been verified by the medical team at the concerned hospital. For any clarification on the treatment or associated costs, contact the campaign organizer or the medical team.
Click here to help baby of Pragathi
Donate 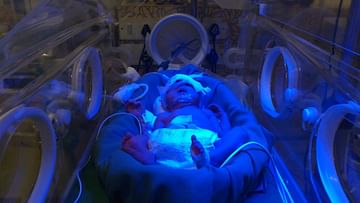 Baby of Pragathi is an extremely premature baby. He needs your help to get stronger.