His Heart Will Stop Beating If He Does Not Have An Open Heart Surgery Soon | Milaap
loans added to your basket
Total : 0
Pay Now

"He was 10 days old. We were discussing names and Baptism when he started crying. He became blue. He stopped responding. I kept waking him. He did not move. He was not breathing." - Jancy (Mother)

Two weeks ago, Jancy and Daniel welcomed their second child, a son. Everyone at home huddled over the new member of the household, coddling him day and night. Yesterday, the family rushed him from their village in Nellore to Chennai. Here he lies in the ICU of a hospital, on a ventilator. Unknown to the couple, their baby was born with a major heart defect. He needs open-heart surgery immediately.

Jancy assumed her son to be healthy. There was no reason to suspect any defect, and with lack of facilities in their village, she did not have the required prenatal tests. When they brought him to a hospital in Chennai, the baby was diagnosed with D Transposition of Great Arteries. The major blood vessels in his heart are connected to the wrong side. Instead of pumping good blood to the body, his heart is sending bad blood. Without enough oxygen, his tissues and organs are suffocating.


"He is not able to breathe. His heart has to work overtime to keep him alive. That makes him tired. He sleeps most of the time. He is finding it difficult to feed. At this rate, he won't survive past this week." - Jancy

"Maybe she should have stayed with me through the pregnancy. Maybe I could have prevented this."

As is custom in several South Indian households, Jancy went to live with her mother until she had the child. Daniel believes they could have gone to the right hospital and gotten the right tests if she had stayed with him in Avadi. He could not stop working. He needed the money to pay the bills. Now, he is not able to even pay for meals.

"We are staying in this sump room behind the hospital. We cannot afford a room for rent. It is expensive to buy food in this city. I am with my wife, my 3-year-old daughter and my uncle. We are all waiting to take our baby boy home. I don't know when that will be possible, or even if it will happen." - Daniel (Father)

"I see him with those tubes and tapes. He tries to remove it. He cries so loudly. It scares me that he will stop breathing again. I work in construction. I get 6000 rupees every month. I don't know I can pay for an angiogram that costs 50,000 rupees. In this, the surgery he needs costs 12 lakhs. I will never be able to afford it. Does it mean I'll lose my son?" - Jancy

Time is running out and you are their only hope.

Right now, Jancy's baby boy is septic on the ventilator, and critical. Without this surgery, his heart will fail. The family has been given a week's time to consent for surgery. They are losing hope as all avenues for funds have dried up.

This baby boy needs open-heart surgery as soon as possible. Only you can make it happen. 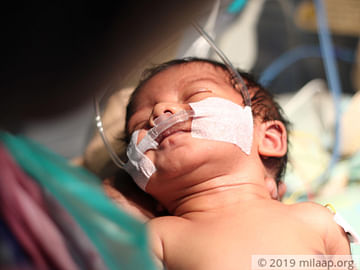 They Have Given Us A Week's Time

Jancy's son is in a critical condition and they have less than a week to arrange the funds for...

UPI: rzpy.givetomlpdaniel00003@hdfcbank (Copy to clipboard)
Or
Click here to read the instructions before you make a bank transfer.