This Baby's Body Stopped Growing And He May Not Have Long To Live | Milaap
loans added to your basket
Total : 0
Pay Now

“The first time my newborn son and I met, we just looked at each other for a minute. He looked so fragile and helpless. And then he reached out towards me with his tiny hands, like he was asking me for help, and I just… I couldn’t take it anymore, I burst into tears. I remembered all the problems that my husband said my baby was suffering from, and all I could think about was the crib that we had already bought for him. How it was just sitting at home and how… how it might stay empty forever.” – Rajitha, mother

Raj Kumar and Rajitha got married in 2016. After 3 long years, the couple’s prayers were answered early this year when Rajitha got pregnant. Even though the closest children’s hospital was 72km away, the responsible young couple regularly went there to get scans and tests done to make sure their baby was fine. It was during such a routine check-up in Rajitha’s 8th month of pregnancy when the doctors discovered that the baby in Rajitha’s womb had stopped growing.

Due to some reason, the circulation of blood in the baby’s body had slowed to such a dangerous level that his body had stopped growing and stayed the same weight and size as a baby in the 6th month of pregnancy. He was growing, but only in weakness.

“They told us that Rajitha needed an emergency c-section, that it was the only way to save our baby. We immediately agreed and the surgery happened within 24 hours. The first time I saw my son I couldn’t believe my eyes. He looked like a doll, small and incredibly delicate. It seemed like a miracle that we had him delivered when we did, if we had waited any longer he might have disappeared entirely.” – Raj Kumar, father

But this newborn is far from saved.

Due to his blood circulation problems and preterm delivery, Rajitha and Rajkumar’s son’s body is riddled with a host of problems. His lungs are severely underdeveloped. He has stayed on ventilator support almost 24x7 from the moment he was born. He has an infection in his blood, caused by a condition called Necrotizing Enterocolitis. This is a devastating disease that affects mostly the intestine of premature infants. The wall of the intestine is invaded by bacteria, which cause local infection and inflammation. On top of all this, he has a hole in his heart.


“He needs at least another week or two of ICU care. But we already sold the house that we all used to live in. It was very small, and didn’t get us much money. My father told me yesterday that my mother has started working at their neighbor's house washing dishes, so she can help save her grandson. My wife and I have been sleeping in the hospital’s waiting halls. It breaks my heart to see my mom start working again, to see my wife in such a state soon after getting a surgery, but we will do anything to save my son.” – Raj Kumar

The desperate couple has also borrowed a total of 2 lakhs from their friends. Despite all their efforts, however, the money they’ve been able to gather is not nearly enough to cover their son’s urgent medical care expenses.

These parents have reached the end of their rope, and it is now up to you to give them a helping hand. Donate now, and save this young couple’s firstborn. 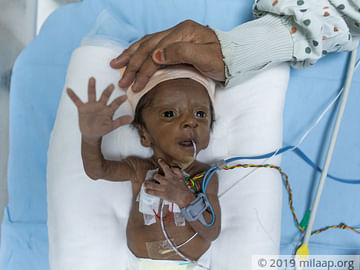 They will do anything to save his life, but despite their efforts they cannot afford it.