She Screams In Terror When Someone Goes Near Her, The Pain Of Her Failing Liver Is Killing Her | Milaap
loans added to your basket
Total : 0
Pay Now

She Screams In Terror When Someone Goes Near Her, The Pain Of Her Failing Liver Is Killing Her

Shares
Shares
Share on whatsapp
The first thing you will notice when you meet baby Laya is the fear in her eyes. She’s terrified – of hospitals, injections and people. She looks at everyone like they are going to hurt her, even her own father, because pain is all she has known for over a year now. She holds on to her mother with her frail arms, refusing to let go. And if she is taken away even for a second, the entire ward resonates with her screams and cries. It’s a heartbreaking sight, especially for a mother.


“I can’t leave her, I can’t even put her on the hospital bed without her crying..she calls out to me begging for me to carry her. She cries all day now. When all this began she was 11 kgs, now she’s 7 kgs and her weight is only decreasing. Look at her arms…they are like sticks…there’s nothing. She’s disappearing before our eyes..she’s dying..” – Saritha, mother

They told us there was no cure, that she would suffer and die

Laya is only 3 and she has spent more than half her life in pain. It all began over a year ago when Laya suddenly started losing weight. Her stomach started swelling, she had constipation and she just wouldn’t eat. Venugopal and Saritha were lost – what was happening to their child?


“No one could tell us for months. One hospital even said there’s no cure for her and she’s going to suffer till her body gives up. How can a mother hear these words? But I refused to give up. We’ve taken her to more than 5 hospitals, everywhere she’s had so many blood tests, so many injections. That’s all her life has been.”

Baby Laya’s chronic liver disease was finally diagnosed after months of shuffling from one hospital to another. Now, only an urgent liver transplant can save her.

I will sell my house if I have to, but we still won’t be able to afford the transplant

“She was so active before this. She would run around the house, play with her sister. Now she doesn’t even have the strength to stand up on her own.”

Baby Laya now waits for a liver transplant home. There’s nothing else she can do. Venugopal is a daily wage labourer and earns just enough to run the house. On some days, he even sings at functions to earn a little extra money. But the past few months have been so difficult, he has barely earned anything. They have spent over 6 lakhs till now by selling the little gold they have and borrowing from people. That’s all they can do, that’s all they have.


“If I have to sell my house to save my baby, I will. But even that won’t be enough to afford the 16 lakhs…it will barely get us a lakh. How can we manage the rest of the money? I beg you, please save my daughter’s life. We can’t do it without your help.”

You are baby Laya’s only hope. An urgent liver transplant will put her out of this pain and misery. 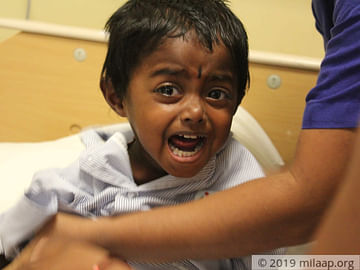 They Told Us She Would Suffer And Die, But They Were Wrong

Laya can be saved with a liver transplant. She needs it at the earliest.

UPI: givetomlpvenu1@yesbankltd (Copy to clipboard)
Or
Click here to read the instructions before you make a bank transfer.