Their Baby’s Heart Stopped 6 Times Already, Parents Fear The Next Time Might Be The Last | Milaap

Their Baby’s Heart Stopped 6 Times Already, Parents Fear The Next Time Might Be The Last 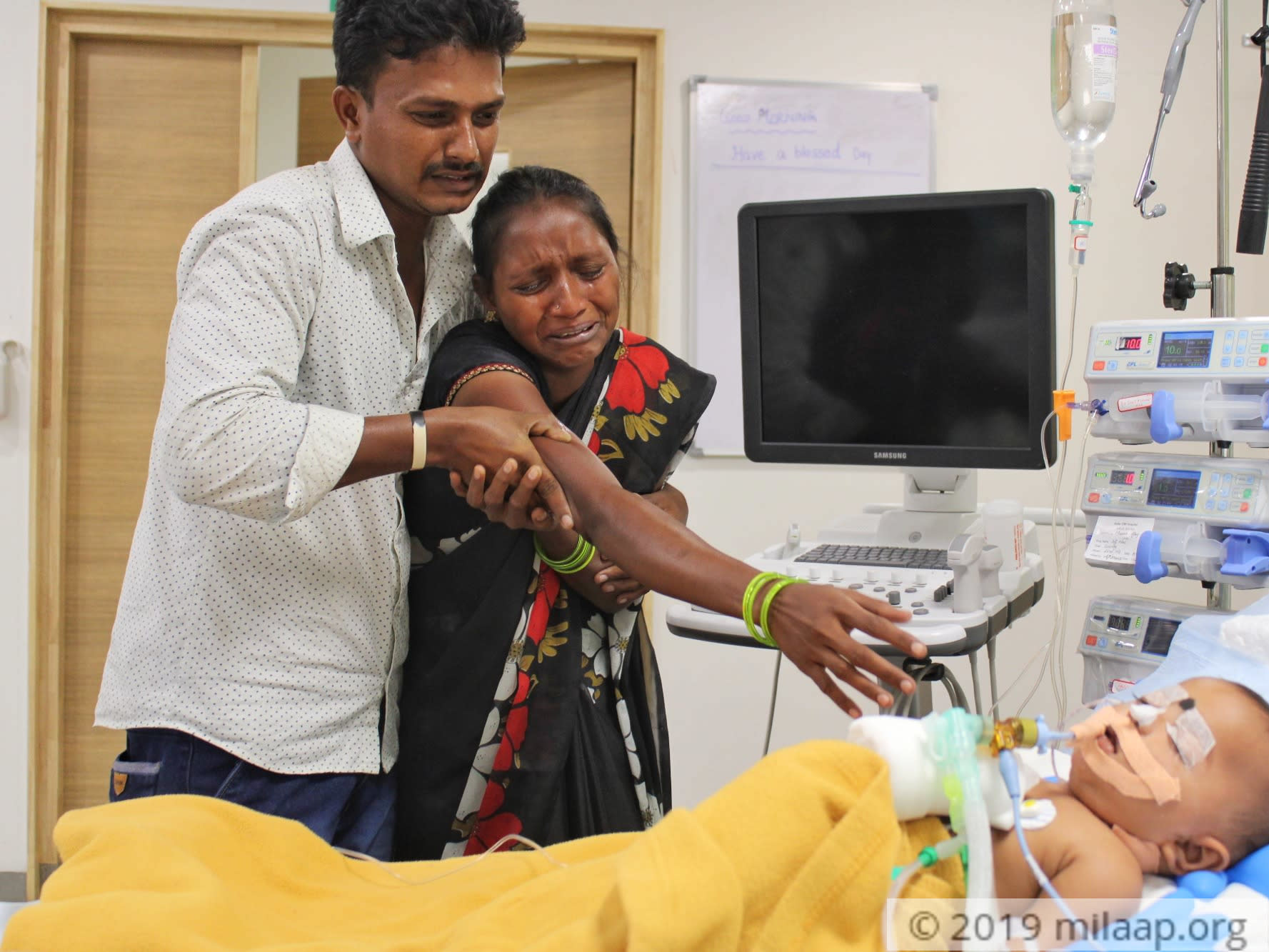 Share
When he was born, we thought he would be the start of a new chapter in our lives, the end to all the pain we’ve been through over the past few years. We had decided on day 1 that we would protect him his whole life, that we would never let anything happen to our little boy. Now, just a few months later…
We watched his heart stop six times that night. And each time we feared… that he wouldn’t wake up again…
– Bhagyalakshmi, mother

Bhagya gave birth to little Ajay six months ago without any complications, after a normal pregnancy. Once they took him home, he had proved to be very active and healthy, much to the delight of his parents. The problems started just one week ago, at night, when he seemed to be having trouble breathing. His parents had taken him straight to the doctor despite the hour, which ended up saving his life. Because by the time they got there, his heart had stopped beating.

Bhagya and Uday are not new to tragedy

“This is my third time, having a child. The first time was a son too. He passed away when he was just two months old. I still don't really know what happened; it had started off with fever, and within days he was gone. The second time I got pregnant, my child died when it was still in my womb. Just one month before I was to give birth. And now… this. I keep wondering, am I cursed? Or are my babies cursed for being born to me?”
– Bhagya, breaking down

Little Ajay’s organs are shutting down one by one

After being admitted that night, baby Ajay’s heart stopped 5 more times. He was diagnosed as having refractory shock, the most severe form of blood infection. Usually, shock can be controlled in babies with adequate care and medication, but refractory shock requires weeks of intensive care in the ICU and constant monitoring. Baby Ajay's heart and lungs are already showing signs of imminent failure. Without ICU care, his liver, pancreas, and digestive system, will shut down one by one next.

Uday is struggling to keep his third child alive

“I can’t lose him too. More than me, I don’t think Bhagya will be able to take it. They say if we can keep him in the ICU for two more weeks he’ll be alright, but that costs 4 more lakhs! I’m just a farmer, without any land of my own. The money I earned working on other people’s farms was comfortable for 2 mouths, and just enough for 3. Where will I get so much money? I’ve already spent 4 lakhs through loans, and have been trying to borrow more but nobody is lending me any more money without collateral.”
– Uday, father

This family is desperate to not lose their last chance to have a child of their own. Doctors told Bhagya that she wouldn’t be able to conceive another child without endangering herself or the baby. Little Ajay has to survive.
And he can only do so with your generous contributions. Please donate now, and save baby Ajay’s life.
BO
Patient Baby of Ajay Kumar is 4 months old, living in Bengaluru, Karnataka
AC
Being treated by Dr.Chethan in Aster CMI Hospital, Bengaluru, Karnataka