With Only 2 Days Left, This Father Is Running Out Of Hope And Time To Save His Son’s Life | Milaap
loans added to your basket
Total : 0
Pay Now

You are sending a message to
Gaurav Srivastav
Go back

With Only 2 Days Left, This Father Is Running Out Of Hope And Time To Save His Son’s Life

Shares
Shares
Share on whatsapp
Atharv is a curious 3-year-old. He wants to know why only he gets injections every day, and most of all, why he can’t leave this hospital room that he has been stuck in for weeks. It’s true, Atharv hasn’t seen the outside world in a long time now – he has to stay in the isolation ward, it’s the only thing keeping him safe.


“He asks me why he has to go through this. I tell him that when the battery in his toy car stops working, we put new batteries, just like that he also needs new batteries to get better. His reply is quick and prompt – I don’t want new batteries, it’s very painful. I just want to go home… what can I say? Taking him home will kill him.” – Gaurav, father

Atharv before he lost all his hair to the treatment

He has been suffering since he was just 6-months-old

The ‘battery’ that Gaurav speaks of is a bone marrow transplant that Atharv underwent in March for his blood disease.  Atharv was diagnosed with Thalassemia when he was just 6-months-old and was undergoing blood transfusions every 3 weeks before Gaurav and Manisha learnt of the permanent cure.


“We even took him home for a few days after the transplant, everything seemed to have worked out…but soon he started falling sick. One night he fell so sick that he couldn’t even breathe. He was shifted to the ICU then.”

If you see Atharv’s earlier pictures, you won’t believe that he’s fighting a deadly disease. The blood transfusions were keeping him active. His 3rd birthday in November was the last happy memory the family has – everything went downhill after that. Atharv only got sicker.

Gaurav had no option but to quit his job. It’s been 4 months since. He has no income and no savings anymore.

“Manisha stays with Atharv inside the bone marrow transplant ward...I visit him for 10 minutes at least twice a day. He can’t be around too many people. We have to wear masks every time we enter. Even though I can’t stay in the ward with him, I have to be in the hospital, available if the doctor calls me.”

This has been their life for the past 4 months. After spending lakhs on his treatment so far, Gaurav can’t afford the treatment Atharv needs on Monday. He’s running out of time. 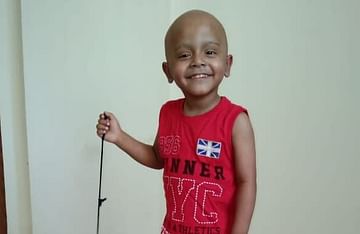 Atharv needs treatment in 2 days to survive. His parents have nothing left to save him.

UPI: givetogauravs1@yesbankltd (Copy to clipboard)
Or
Click here to read the instructions before you make a bank transfer.