"Papa Will Take Care Of Me In Heaven, I Don't Want To Be Your Burden" | Milaap
loans added to your basket
Total : 0
Pay Now

A
You are sending a message to
Anirudha
Go back

"Papa Will Take Care Of Me In Heaven, I Don't Want To Be Your Burden"

Shares
Shares
Share on whatsapp
When my husband Santosh died, I was a housewife with no other family in Mumbai. Earlier one of our sons was fighting for his life. My husband was always stressed about it. He had a stroke. My sons Ashutosh and Abhishek found him lying on the road. They were afraid. Death took the only person who was doing everything to protect them - Anupama, mother of Ashutosh.


My boy is 17 years old and he’s been through so much. Since 2012 he has been on dialysis for kidney failure. Infections became common. The ICU became his second home. In 2014, he had dengue. Over the years, several times I have felt like he was living his last day.

"It's ok Bhaiya! You'll be ok. Let's watch something on the phone for a while." - Abhishek to Ashutosh in an attempt to distract him.

My husband and I were not a match

While we waited for a kidney to become available, Ashutosh got weaker. He got depressed watching his friends live and go to school. His brother stayed home with him. They studied together, from Abhishek's textbooks. However, Ashutosh could not help feeling imprisoned by his disease. Finally a year after we lost Santosh, Ashutosh got his transplant.


"When I get a job, I will buy a bike like this." - Ashutosh, hopeful for a future after the first kidney transplant

But just in 5 months, our happy days were over

The transplant didn't turn out to be a success - Ashutosh' kidneys failed again. He became so weak that I was sure he wouldn’t survive. He couldn’t even lift his legs, forget getting out of bed. Since then, we had had to spend almost Rs. 45,000 every month on his medicines and check-ups. We kept selling things we owned to pay the bills. I found a job. It was not paying me enough.

Eventually a single mother is starting to lose hope

Ashutosh stopped eating and started vomiting every hour. It only meant that dialysis was not helping. Now every other day he is at the hospital for 8 hours. Abhishek and I are with him.  Each session costs Rs. 2000, medicines cost Rs. 12000/month. I try hard to make ends meet by working as a teacher for little kids. With Rs. 8000 salary, I have somehow managed to take care of both my sons. But most of the time, I had to be at work.  My sons were there for each other.

We have nothing to call our own

We have sold everything while trying to cover Rs. 35 lakhs of medical expenses in past few years. Now we have nothing. I am scared. I have nobody who will give me a loan. Ashutosh feels like he is a burden. He feels guilty for being alive. It hurts when he says he does not want to live anymore. We fight a lot because of this every day.

"Papa will take care of me in heaven. I don't want to be your burden." - Ashutosh in frustration, as Anupama tries to comfort him.

Ashutosh's life is stuck in 2015. The year he lost his father was the last year he knew happiness.

I don't have big dreams. None of us do. All we want is for him to fight and win

If he does not get another kidney transplant soon, he will lose his life. Until the transplant, he needs dialysis. I have no money left for the next session, no money for his medicines. I am afraid, that after 9 years of fighting, I will lose my son. how can I go on after that?
--

17-year-old Ashutosh’s kidneys have failed twice already. He has spent most of the past decade on the hospital bed fearing death.

As a single working mother, Anupama has been through the hardest of times and has done everything she could to keep Ashutosh alive and look after her second child too. She has absolutely nothing to give to help Ashutosh continue undergoing dialysis. She has nowhere left to go and she cannot save Ashutosh without your support. 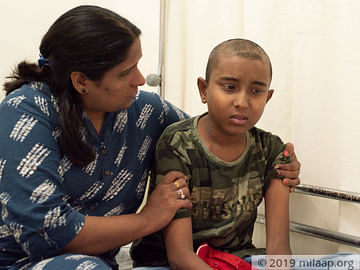 There Is No Money Left For The Next Dialysis Session

Anupama has sold everything she could. She still can't afford her son's treatment