He Almost Lost Her Once Already, Now His Daughter Is Critical Again | Milaap
loans added to your basket
Total : 0
Pay Now

He Almost Lost Her Once Already, Now His Daughter Is Critical Again

Shares
Shares
Share on whatsapp
"A few months back, Arushi's nose and mouth started to bleed and she became so weak that she couldn’t even walk properly. At that point, we were so terrified. I just wanted to save her, so I got her to Mumbai which is around 500 km from our village in Barsi. She had to undergo Bone Marrow Transplant surgery, the only thing that could save her but..."
9-year-old Arushi has been suffering for over 2 years with Fanconi Anemia which is a rare and deadly genetic disorder. Bone marrow transplant was the only cure for her. To save his daughter, Vinod did everything he could. But now she needs post transplant care which Vinod cannot afford. He is drowning in debt, and has absolutely nothing left to continue her treatment.

“Her hands and leg would swell up and she’d be in so much pain. Her nose would bleed frequently, and her stomach wouldn’t stop hurting. We admitted her several times, she was admitted for an entire month straight one time. After the transplant I thought her pain and suffering will be over but…”

The parents cried for days, it was a very difficult phase for them. For Arushi, it was no less than hell. Without continued treatment her health will start deteriorating again, and there will be no coming back from it.


She doesn’t even leave her room in Mumbai, she only does so when she goes to the hospital. She was such a playful child, and now she feels stuck, confined in a small room. Arushi hasn’t even gone to school for over 2 years. After giving her second grade final exams, she had to be admitted to the hospital.

"It’s been just few months since she had her bone marrow transplant. We thought everything will be fine after that but… but it is not enough. She needs 6 months post transplant care but I just can’t continue anymore…” - Vinod, father

She is very fragile right now, she needs at-least 5-6 months of treatment more

“Just the rent itself for the room in Mumbai is Rs. 13,000 per month, which is more than twice my salary. I have 3 more kids and my wife.  I have to provide for their food too, and the medicines! I’ve been borrowing from my friends and relatives and I keep having to go back to my village so that I can earn more money. For her treatments until now, I’ve given all my savings... I have nothing left now. I just want to save her but I don’t know how!”

Vinod needs your help so that he is able to provide for Arushi’s 6-month-long post transplant care. You are their only hope.
Donate 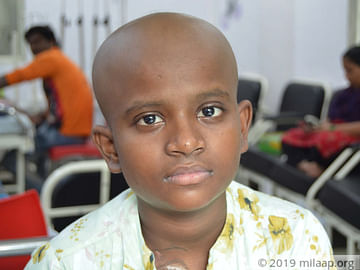 The thought of losing their daughter even after a life saving transplant is killing them.

UPI: givetomlpvinod18@yesbankltd (Copy to clipboard)
Or
Click here to read the instructions before you make a bank transfer.