Even In Pain, All This 7-Year-Old With Heart Disease Worries About Is His Sick Mother | Milaap
loans added to your basket
Total : 0
Pay Now

Even In Pain, All This 7-Year-Old With Heart Disease Worries About Is His Sick Mother

Shares
Shares
Share on whatsapp
How unfortunate does a child have to be to think that the only time he can go out for visits is when he goes to a hospital? Ankush is only 7 but his entire life has been bound by restrictions. He can’t run around and play like kids his age do. He misses all of that, but he makes do with the train rides to the hospital. This 7-year-old boy’s heart is failing, only urgent surgery can save him. His father spends sleepless nights worrying about his son's future.

Ankush’s birth completed Laxmi and Balraj’s family. But six months into this world and he was diagnosed with heart disease. Now they these parents are at a loss. Their son needs an urgent heart surgery but they don’t have the means.


“Ankush had to undergo a surgery when he was just about 1. We thought it would make him better but we were wrong. The pollution in Haryana is making his breathing trouble even worse. He now needs another surgery, that’s the only way he can live,” - Ashok, father.

Maa is not well, Papa - let’s go back home

Even the simple act of walking a few steps tires Ankush out. Sometimes, his lips and nails turn blue because his heart can’t pump blood to his entire body. The sight is frightening - Ankush doesn’t have much time left, he needs the surgery at the earliest.


“While my son and I are waiting for his regular check up, Ankush only worries about his mother. He is the youngest of our children but the closest to Laxmi. Her health hasn’t been great for the last few months. So Ankush is always taking care of her. The sight brings tears to my eyes - how can a kind-hearted boy like him, suffer so much?”

A farmer by profession, Ashok hardly earns enough for his family. But despite their regular struggle, they were very happy. Till they got to know that their 7-year-old son won’t survive without a surgery. Now every day of their lives is spent in the fear of losing him. Ashok has already spent over 2 lakhs on Ankush’s treatment. He needs your help to arrange for the 10 lakhs that he needs now for his son’s surgery.

Ashok and Laxmi can save their 7-year-old son with your help, a small contribution can go a long way 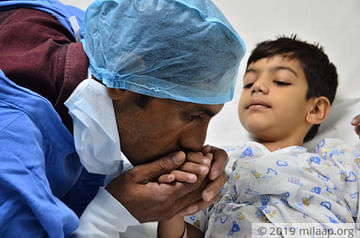 I Feel Helpless Every Time I See My Son, I Don't Want To Lose Him Without Treatment

Ankush needs an urgent surgery to fix his failing heart, you can help him