MS
You are sending a message to
Milap Singh
Go back

“When my 9-year-old son Animesh asks me, ‘Mumma, I know that without the petrol the cars will stop moving. Is it the same for me? Am I going to die without the blood transfusions?’ I try to deviate the topic every time. How will I tell him that the very blood transfusions that has kept him alive for so long is depositing iron in his blood and can even end up killing him?”

Regular fevers made Animesh's body burn and he was throwing up frequently; the parents only learnt much later that he had a grave disease

“Since Animesh was just 6 months old, he started having fevers that would sometime go up as high as 104 degrees. It was scary to even touch his burning body. He even started throwing up frequently. We had no idea what was happening. After running behind multiple doctors in Bhopal for almost a year, we were finally told that our child has thalassemia major, a disease we hadn’t even heard about before that.”

Although blood transfusions were keeping him alive, they did nothing to improve the quality of his life and Animesh is determined to fight

Animesh has a dangerous disease where his body produces abnormally less amounts of hemoglobin. He is so tired that he sits and watches other children as they play. He can’t even sit on a swing because that makes him vomit. But this strong boy is not ready to give up.

“My little son was very scared of needles. Now, although he knows that the blood transfusions are a part of his life, I don’t think he has accepted it as his fate. He keeps telling his little sister, Ashita that one day he will not have to go to the hospital, one day he will not need medicines anymore. I can’t tell him that we are struggling every day to make his bone marrow transplant happen so that he doesn’t have to go back to hospitals ever again.”

What was once a life-saving treatment for Animesh has now put him at further risk. Blood transfusions have caused iron deposition in his blood which can lead to liver or heart failure. While normal iron concentration should be between 20-300 mg/dL, for Animesh it is as high as 1860. He’s so critical now that without a bone marrow transplant, he’ll not live. The needles have heavily damaged his veins which can become deadly in no time.


“My husband, Milap, works as a machine operator in Bhopal and can barely manage to earn Rs 7000 a month. The money that we were saving for our kids’ future, is gone now. By borrowing from friends and relatives we have somehow managed to pay Rs 8 lakhs so far. Now we have nothing left to save him.”

Animesh needs an urgent bone marrow transplant to beat his blood disorder. The only problem is that it costs around Rs 14 lakhs, which his father, Milap cannot afford.  Animesh’s sister is a match and can donate a part of her bone marrow to him. But as long as the funds don't arrive, this family has no hope.

Your support can help this child live 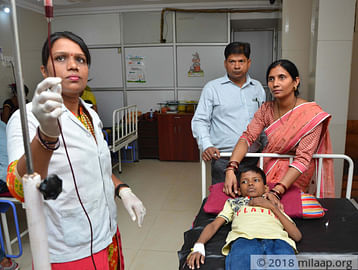 Blood Transfusions Are No Longer Enough To Keep Animesh Alive