This Daily Wage Laborer With TB Is Toiling Hard To Save His 4-year-old Son From Heart Disease | Milaap
loans added to your basket
Total : 0
Pay Now

“Sometimes I feel like my whole life is a waste. I am too sick to do anything for my family. But then I see my children and realise that I cannot give up. They are the reason we go on.”

Abdul is a daily-wage worker who earns a living by working in a glass cutting factory in a small village 200 kms from Lucknow, Uttar Pradesh. He suffers from bad health and only recently recovered from TB. Last month, he found out that his 4-year-old son Anash had a hole in his heart. Since then, Abdul has been trying to find a way to get Anash an operation that will save him.

This father feels helpless to save his 4-year-old son

At an age when children are at their most energetic – Anash is unable to exert himself at all. For the last one year, even the smallest physical exertion tires him out. He started school, but had to soon drop out because he did not have the energy left.

Anash standing behind the door of his house

His condition has left his parents heartbroken. “Anash is so sick he can't walk 10 steps without getting tired and out of breath. Sometimes he says his chest will burst open and he runs to us for assurance. Other times, he tells us that he is taking medicines and he will be all right,” Abdul says.

Anash at home with his sister

Anash was diagnosed with a hole in his heart last month. Before this, his parents assumed that he was just weak like his father. With enough nutritious food, they hoped that he would become better. Slowly, Anash became unable to do any exercise. His heartbeat started racing and his face became dark.

Anash with his family in their house

Unfortunately, because Abdul was sick he was only able to take Anash to the doctor this month. When he found out that Anash had a heart condition, guilt at not having enough money to take him to the doctor assailed him. Since then, Abdul has been fighting absolute despair at his condition.

Anash's family is waiting for the day he gets better

Having to drop out of school, Anash now stays at home with his mother. When his sister Mariam comes back – he pleads with her to carry him outside to the playground. Mariam carries him outside and takes him for a walk. She knows exactly how sick her brother is and her parents trust him with her.

Anash with his sister Mariam

Anash's mother cries when Anash's heart beats painfully fast or when he sometimes gets too tired to get out of bed. She wishes she had finished her school so she could earn some money for the family. Abdul works long hours and his health is too poor to keep up this kind of manual labour.

Anash at the hospital for tests and treatment

“People don't like to help sick and weak people like me. They feel like I will not be able to repay them. I keep myself going with thoughts of my children, who have done nothing wrong. My son is being strong and he believes he will get better, and we don't have the heart to say anything,” Abdul says.

Anash needs a minor surgery that will close the large hole that his damaging his heart. He has a very good chance of recovery provided he gets the surgery at the soonest. His father, the sole breadwinner earns less than Rs 10,000 per month. With his own bad health, he has no hope of collecting the Rs 6 lakhs needed to save Anash.

Never has Abdul felt so unfortunate as now when he could lose his son because he cannot afford treatment. Anash's condition is easily curable, but without an operation, he may not live long. Help this desperate father save his young son.

Contribute to help him get Anash a heart surgery that will save his life. 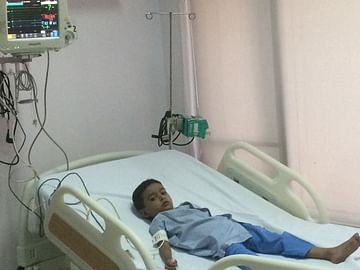 Anash has a severe heart condition. His father, a daily-wage worker is struggling to save him.