This 9-year-old Has Lost His Childhood Trying To Survive A Liver Disease That Might Just Take His Life | Milaap
loans added to your basket
Total : 0
Pay Now

You are sending a message to
Rajanikumari Ala
Go back

“He knows there is something wrong with his body. He hesitates to ask. We never  got the courage to tell him. He is just 7! What would he even understand? If the disease doesn’t, fear might just kill him!”

For 9 years, Manikanta has been suffering in pain, from a liver disease while he should be growing up and living his childhood. His parents, daily-wage laborers have been toiling in sun, day and night trying to earn enough to save his life.

When he was just 3 days old, Manikanta's mother noticed there was something different about him while she was breastfeeding. His eyes were yellow and his stomach felt bloated. The family took him to a local doctor who prescribed medicines for jaundice. After a month there was no change. When the problem continued, they went to Vijayawada.

"We roamed from one hospital to the other for 2 months. Nobody gave us an answer. Finally, we heard the worst news. A doctor told us after tests, that our son had just 6 months left because his liver was damaged."

We resolved to do anything to save our son

Hearing the morbid fate that the future held for Manikanta, the family took him to NIMS in Hyderabad, hoping to find a cure. They could not afford it, but they just wanted to save him. From there, they were referred to another hospital which turned him away as they did not treat children. Like this, the family ended up at Rainbow.

"Here we discovered that whatever milk he was drinking was not getting absorbed. There was a blockage in his intestines and he needed a surgery. The surgery would be dangerous with his liver condition. We went for it anyway because he was bleeding on the inside. The government scheme helped us through it. "

Everything seemed rosy, and then his liver issues began again

Manikanta was 2 when his bowels changed color with blood in them. Every month, a new symptom showed up to scare them and torment him. They had to keep running to the hospital. By now, doctors made it clear that he needed a transplant before time runs out.

"We had applied for PM and CM funds. We never received them. It has been years, and only now we have received a response. My husband, Srinivasa, is a coolie getting Rs. 300/day. With this we take care of our daughter (10 years) and our son. Our parents have been supporting us so far. Debt has chased us all our life."

This disease has stolen away Manikanta's childhood

The parents never sent him to school because he would keep falling sick. It has just been 2 years since Manikanta started going regularly with his big sister, and now his condition is critical. Looking back on his life, he will not see a happy childhood but just memories of pain and hospital.

“We used to send him to school for 2 days and that would exhaust him so much that he would be bedridden for 3 days. He even had epileptic seizures at school and we had to rush him to Rainbow.”

Manikanta’s life is in danger. He will not survive for long without this surgery. He has not lived a normal life till now. He has been on the bed for most of his life and unfortunately, the boy does not even know what is happening to him.

"We cannot afford to stay in the hospital or in the city. We take the night bus reach the city, get treatment and leave the same day. How can we afford a surgery that will cost us Rs. 16 lakhs?"

This family has been waiting for years to save their son. Time is ticking. He just has a few months left. Your contribution will help him survive.

The specifics of this case have been verified by the medical team at the concerned hospital. For any clarification on the treatment or associated costs, contact the campaign organizer or the medical team.
Click here save Manikanta.
Donate 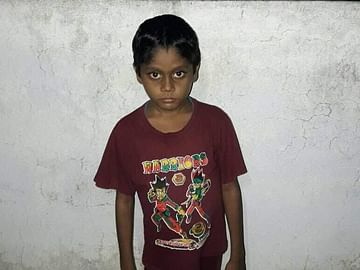 He has been suffering from liver disease since he was born. He can survive with your help.