This 6-Year-Old Was Hospitalized For Uncontrollable Bleeding After Kids At School Pushed Him Off A Bench | Milaap
loans added to your basket
Total : 0
Pay Now

“I don’t let him be on his own even for a minute. I don’t even let him go to the washroom by himself – I carry him there. The doctors have told us to be very careful or he can bleed to death due to even a small injury. We are scared for his life,”-Shameeda, mother.

Little Afan is confined to his bed. He does everything on it – eats, sleeps, plays with his toys and is not allowed to even go to another room in his house. The hospital is the only place he goes outside. His parents fear that he might fall or bump against a table or chair if he’s allowed to roam freely in the house. If he does fall or even just slightly scrapes off against an object, he starts bleeding profusely.

Afan was diagnosed with a severe blood disease, aplastic anemia when he was just a year old. Every 15 days, his platelet levels would drop as a result of this and he would need blood transfusions immediately. He’s always been smaller than his peers. His classmates in 1st grade would make fun of him always, but 3 months back, they pushed him off the bench.

“He landed face down on the ground. He was bleeding from his nose and mouth. The teachers put ice and tried controlling it, but it did not stop. They rushed him to the hospital – that’s when the doctors said that his disease is getting worse and he needs a transplant. Now he is not going to school,”-Akram

He cries because of loneliness, but his loving sisters try to lift his spirits

Afan's sisters Asna (8) and Alekha (10) don't know the exact nature of his disease, but know that their brother is very very sick. They try to put a smile on his face by telling him stories of whatever happened at school that particular day. Afan asks them about his class and his teachers and his sisters promptly lie that everybody misses him. This makes him feel better. But when they go to school in the morning, Afan cries non-stop for hours altogether. Nothing his mother says consoles him and he feels better only after his sisters come back from school.

Afan is forced to play all by himself when his sisters, Asna and Alekha go to school

On Rs 5,500 a month, this daily wager is struggling to save his son and needs your help

Akram is a daily wager working on other’s farms in a small village Yavatmal, Maharashtra. He earns just Rs 5,500 every month. But his son Afan’s blood transfusions cost Rs 2,000 a month. He is unable to buy enough groceries and household items that would last his family a whole month because of this. Now Afan needs a bone marrow transplant, and Akram has nobody to ask, nowhere to go in this hour of need.

“Without the transplant, my son will not survive. But I haven’t even seen Rs 10,000 in my life, how will I be able to arrange lakhs? My relatives are also poor like me. Please help me save my son,”-Akram

With your kind contribution, this daily wager will be able to get his son a life-saving bone marrow transplant before it is too late 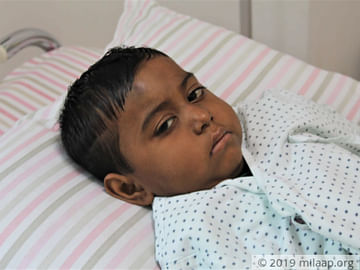 This little boy is critical, is confined to his bed

Without an urgent bone marrow transplant, Afan will not be able to survive