This 16yr Old Has A Chance To Walk Again With Your Help, After Being Isolated In His Home For Two Years | Milaap
loans added to your basket
Total : 0
Pay Now

This 16yr Old Has A Chance To Walk Again With Your Help, After Being Isolated In His Home For Two Years

Shares
Shares
Share on whatsapp
16-year-old Adarsh is suffering from a condition that has left him bedridden and isolated from the world for 2 years. He is in so much pain and sadness, that he told his father that he wants to die.
This is his story. You can help him walk again.

Adarsh was always a bright boy. He loved learning new things, and enjoyed going to school. He earned his first scholarship when he was just in the 4th Standard, and then went on to frequently win competitions and more scholarships, getting state-wide recognition over the years. His favorite prize was a laptop he won from his school. Things took an unexpected turn in 2017 when he was in his 9th Standard, however, when he developed a fever that lasted a week.

“The first two days I was very concerned, and by the fourth day I was worried sick. He had to be hospitalized in town, but the doctors didn’t know what was wrong with him. One doctor was sure it was Dengue fever, but the treatment for that didn’t work on him, he just kept getting worse. We took him to Pune, where he was admitted into a bigger hospital. But then… but then my son went into a coma.” – Anandrao, father

When Young Adarsh woke from his coma after 1.5 months, he was not the same boy

“He was so different. He didn’t know where he was, or what was happening. The happiness I felt for getting my son back was gone in an instant when… I had looked into my baby boy’s eyes and I could tell that he… he didn’t know who I was. I can’t even describe what that feels like as a mother, I was just heartbroken.” – Rajatri, mother

It was later discovered that young Adarsh had been suffering from a brain infection, which had caused the fever and resulted in Postseptic Leucoencephalopathy: extensive brain damage. His body had shut itself down into a coma-state to prevent further damage. Eventually, Adarsh started recognizing his family, but he was never the same as before. He stopped smiling, and his arms and face regularly started twitching and moving on their own. He was no longer able to talk.


14-year-old Adarsh’s problems did not end there, however…

A few months after his coma, Adarsh’s elbow seemed to be hurting him. When they got an x-ray done, doctors discovered a faint and unusual mass in the muscle near his elbow. Soon, he started getting aches in other parts of his body as well, and after further x-rays were done, he was finally diagnosed as now having Myositis Ossificans: he was developing bone mass inside his muscles. This is an extremely rare condition by itself that affects large joints in the body, but the fact that Adarsh was only 14, and that he had suffered no physical trauma, made this a one-in-a-million occurrence.


He may never fully recover his mind, but he does still have a chance to start walking again.

Due to his extremely young age, operating on him for this condition was not an option. His family was advised to wait a couple of years and only then consider the surgery. Adarsh is 16 now, and over the past two years he has developed these bone masses near both his elbows, his hip joints, and his knees. He is unable to use his arms properly. His legs are permanently so bent outwards at the hips, that not only is he unable to walk, he can’t even fit in a wheelchair, or even MRI machines. Poor Adarsh has been bedridden and isolated from the outside world for 2 years, with his laptop as his final and only connection to other people. Surgery is now finally an option, but his family is too poor to afford it.


He thinks dying would be better than living like this, because he has given up hope that his family can afford the surgery…

“I was sitting with him a month ago, and he just looked so sad. I wanted to try and distract him so I gave him his laptop – that’s how he talks, by typing one letter at a time. I asked him what he was thinking about and he just looked at me for a minute. I could still see the same intelligence in his eyes, even behind his facial twitching. Then he slowly typed ‘I want to die papa...’ I normally don’t cry in front of him, but I just burst into tears when I read that. I hugged him and apologized for not being able to afford the surgery. I hated myself for it then, and I still do.” – Anandrao, father, weeping

All young Adarsh wants to do is go outside and walk in the grass, or stand in the rain. He wants to be able to clothe himself, and bathe himself. But his parents are both unemployed. His father had to quit his job two years ago and stay at home because taking care of Adarsh is a two-person job. They’ve sold everything of value in their house by now, all except Adarsh’s laptop, to afford his medicines and tests.

This family now seeks your help. However much you can donate will go a long way in giving young Adarsh hope and happiness in his life. He should not be thinking about giving up like this, at just 16-years-old. Donate now. 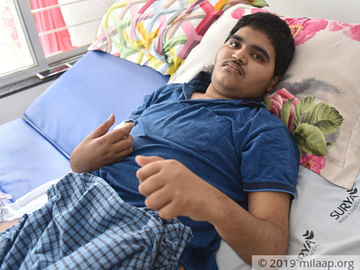 He thinks dying would be better than living like this

UPI: rzpy.givetomlpanandrao004@hdfcbank (Copy to clipboard)
Or
Click here to read the instructions before you make a bank transfer.