This Barber's Baby Needs An Urgent Surgery, He Will Always Be In Pain Without It | Milaap
loans added to your basket
Total : 0
Pay Now

This Barber's Baby Needs An Urgent Surgery, He Will Always Be In Pain Without It

Shares
Shares
Share on whatsapp
Aabid’s father is extremely worried thinking about how his son’s condition could affect his everyday life in the coming years. There is no urine bag to hold his urine for even a short period of time. Aabid Ali, who’s currently 9 months old has a rare congenital abnormality called Epispadias which involves the tube from which the urine exits the bladder. In his case, the opening is at the top of the penis rather than the tip.

He needs the surgery soon, before he turns 1

“The doctors we consulted there couldn’t tell us the real issue, I took him to several hospitals and that’s when I called my wife and son here, in Delhi to get him tested. Because there's no treatment there, they have been doing a lot of back and forth in the last few months which has been costing us a lot already”

Aabid’s father Rajjab runs a barbershop in Vasant village, Delhi while his entire family lives back in UP. Doctors have suggested a surgery as and when he turns one, which is in the next three months since giving him anesthesia isn’t going to be easy right now. His treatment would go on for the next couple of years which would also include complicated repair in the bladder and therefore doctors want to start as early as possible.

Rajjab has spent most of his savings to get his son tested at several hospitals. He urgently needs funds for the surgery to happen on time. Your contribution can help Aabid urinate without being troubled. 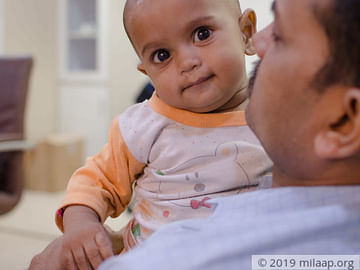 He Needs The Surgery Soon, Before He Turns 1

Only you can help this 9-month-old baby.