32-year-old Venkat Is Worried About What Will Happen To His Old Parents After Him | Milaap
loans added to your basket
Total : 0
Pay Now

You are sending a message to
G venkateswara rao
Go back

“If not for the job, I’d have never known that I was this sick.”

32-year-old Venkateswara Rao thought his life was just fine. He had bagged a good, steady job and a plan for his future. But all that came to an abrupt stop when he went for the medical checkup mandatory for a job with the Indian Railways. The test reports showed his blood pressure to be exceptionally high. More tests followed to investigate his high blood pressure. To his shock, both his kidneys had failed.

He wasn’t even aware that he was sick

Venkat never had a single symptom of kidney failure, not even a minor fever. So, he found it hard to believe the diagnosis. Just a few days after returning home, his feet and face started swelling up. When he went back to the doctors, they told him he needed dialysis. His life had changed for the worse.

“I’m 32. At this age, I should be the one taking care of my parents, not the other way round. It breaks my heart to see my mother struggle to care for both me and my sick father. I feel worthless, I can’t wait to come out of this situation.”

Venkat is the only educated person in his family. He wanted to find a well-paid government job so he could take care of his parents. After rigorous preparation, he finally bagged a job in the Indian Railways. As the protocol of the organisation demands, he underwent all the prescribed tests, only to discover that both his kidneys have failed. His illness has hampered more than just his health. His plans to provide a better life to his parents are also shattered.

His relatives said 'no' to donating him a kidney

“My relatives think donating a kidney will harm them. They’re uneducated, so they don’t understand. What can we do?”

Because Venkat's parents are too old, they started looking for a possible donor amongst their relatives. Sadly for Venkat, none of his relatives came forth to help, since they’re worried about what might happen to them if they donate a kidney. Venkat decided to register with the Jeevandan initiative for cadaver donors. The search for a donor is on. But Venkat's immediate problem is continuing treatment.

Venkat is from a small village in the Khammam district of Telangana. He used to have dialysis sessions at Khammam, but the extensive 8 hours of travel from his village to the town started taking a toll on his health. He started getting weaker and falling even sicker. So Venkat and his parents moved to Hyderabad for treatment.

Venkat’s father Ramu is very old and can’t work anymore. His mother is now the only earning member of the family. Venkat looked after his father and prepared for the exam. But Venkat's treatment and living expenses in Hyderabad have depleted all their funds. Their income is zero and they have taken loans from moneylenders to cover their expenses. They have also mortgaged their house and borrowed money from friends and relatives, but even that money has run out.

Venkat will succumb to kidney failure if he doesn’t get treatment soon. But in order to make this happen, Venkat and his family desperately need your help. Your contribution towards his treatment will go a long way in providing a healthy and fulfilled life to him and his family. 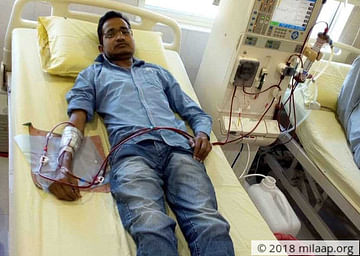 Both Venkat's kidneys have failed and only a kidney transplant can save him.