Bangalore Techie Who Fell From The 5th Floor Needs Your Help To Live | Milaap
loans added to your basket
Total : 0
Pay Now

A
You are sending a message to
Ateeb Ahmed
Go back

Shares
Shares
Share on whatsapp
Despite his busy work schedule and hectic night shifts, Jawad always found out time to help his younger brothers with their studies. Everyone in the family looked up to 28-year-old Jawad as their sole support system. So a month ago, when he fell from the 5th floor of his office building and met with a near fatal accident, the family has been in disarray. His old father has been running around since then trying to arrange for money for his hospital stay. But the costs are piling up and the family doesn’t know how they can bring their son back home.

After almost 2 weeks, he is opening his eyes but only for few seconds

“It was almost midnight when we got a call from his friends and we rushed to the hospital. They didn’t tell us how critical he was but when we saw him, I couldn’t hold back my tears. His condition was so serious that for the first few days the doctors said he might not make it. I sat by his side and prayed night and day - that’s the only thing I could do. Now he is opening his eyes but only for a few seconds - he still needs a lot of care,” - Nazneen, mother.

Jawad had gone to the canteen on the 5th floor of his company building for dinner. He finished his meal and was waiting for his friends to come while he leaned on to the window. He was not feeling well due to low blood pressure. But no one could have guessed that he would get unconscious and fall from such a great height.

Jawad has undergone several surgeries since his admission to the hospital. His left hand and both his legs had multiple fractures - those were fixed. He also needed a heart surgery because his aorta (the main artery of the body, supplying pure blood) had ruptured due to the fall. He is also under medications for the brain bleeds and he needs a ventilator support to breathe.

“Besides our education, my brother has always been encouraging us for extra curricular activities. He loved playing cricket and table tennis. I can’t tell how terrible it feels to see him lying down in the hospital like this - not being able to move anything but his right arm,” - Mohammed Asim (brother).

Jawad’s father, Abdul Hai, works as a salesman in a garment shop in Bangalore and makes about Rs 12,000. The family of 5 stays at a rented place in Shastri Nagar, Bangalore and they pay Rs 15,000 for rent. Jawad’s younger brothers are still studying - one of them pursuing an MBA and the other B.Com. Jawad, who worked for a software company earned about Rs 70,000 a month. But a large portion of his salary used to go for the daily expenses of the family and his brothers’ education. There was hardly anything he could save.

“Abbu has been asking for help from everyone we know. Many of our relatives and my brother’s friends have come forward and helped us pay the hospital bills. But now there is no other avenue from which we can hope to arrange for over 48 lakhs. We have used up our savings and even Jawad’s insurance cover and paid around 22 lakhs till now. But he needs to stay in the hospital for long to get cured - please help us,” - Mohd. Asim.

Jawad fell from the fifth floor and has suffered several injuries. He needs to stay in the hospital for long and their family is looking up to you for a generous contribution to save the son's life 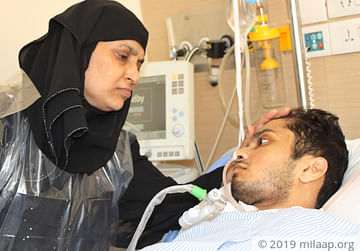 Jawad Can Only Move His Right Hand, He Needs Treatment To Get Cured