Teenager's Stomach Has Swollen To The Size Of Football, Needs An Urgent Liver Transplant To Live | Milaap
loans added to your basket
Total : 0
Pay Now

KC
You are sending a message to
Krishna Chaitanya
Go back

Teenager's Stomach Has Swollen To The Size Of Football, Needs An Urgent Liver Transplant To Live

Shares
Shares
Share on whatsapp
*Update: Ganesh had his transplant scheduled 3 months ago and is still going through the painful wait for his transplant. His condition is deteriorating fast now.

“My wife made me promise on her deathbed that I will take care of our children, but I’m failing her. My son’s stomach is getting bigger with every passing day. The swelling is so much that it feels like it will explode if it gets any bigger. The pain is too much for him, he can’t even turn an inch to his sides. He hardly speaks now, he just holds my hand and cries silently. Yesterday, I saw him talking to his mother’s picture - “Please take me to you, amma!” he was saying. I was heartbroken.” - Ramesh, father of 14-year-old Ganesh.

Doctors have told Ramesh that his son’s liver is damaged completely. He needs an urgent liver transplant to live. But with absolutely nothing in his pocket, this helpless father doesn’t know how will afford it.

It feels like even God has abandoned my son

Ganesh is a dedicated student who never missed school even if that meant that he would have to walk miles. He had lost his mother at 2 to a severe brain fever. Despite being so young, the incident has left a deep scar on his mind. Now he wants to be a doctor, he wants to treat the poor free of cost. He wants no one to suffer like his mother.

“It all started in 2015 - the swelling, the pain. We took him to a hospital, I borrowed from friends and spent about 2 lakhs on his tests. But they were all normal. We came back home relieved thinking he would have to suffer no more. But since this January this disease is killing him, he might not live to fulfill his dreams. Prayers and medicines are no longer helping him. He needs an urgent liver transplant.”

What will happen if you can’t afford the treatment, father?

14-year-old Ganesh has decompensated chronic liver disease. He is too weak to even sit up on the bed. His skin constantly itches and fluid has been building up in his abdomen. His ankles and legs are also swollen.

“He needs help to even put on a shirt. He is so tired that he doesn’t even complain when the nurse gives him injections. I keep telling him that he will be fine but I think he senses that he has a tough fight ahead."

A well-behaved and diligent child, Ganesh is the favourite of his teachers. He also has many friends. They have come forward and contributed small amounts to help him get treated. But the transplant would cost 25 lakhs. A daily wager, Ramesh has no means to afford it.

“I have sold my only piece of land, I have borrowed from my friends and relatives. But there is no way I can arrange for so much money. My son is on the verge of death and here I am, running from pillar to post, scrambling for any little amount that can help me save him. I am willing to be the donor but without the money, I will lose him.”

A dangerous liver disease will take away this teenager's life. His father is a matched donor but he is too poor to afford the transplant. A small contribution from your side can make a huge difference in their lives 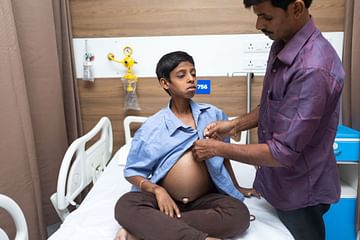 It Feels Like Even God Has Abandoned My Poor Son

14-year-old Ganesh is fighting a severe liver disease, he needs a transplant at the earliest