My Son Bleeds Profusely From His Nose Due To A Rare Disorder, He Is Waiting To Go To School | Milaap
loans added to your basket
Total : 0
Pay Now

My Son Bleeds Profusely From His Nose Due To A Rare Disorder, He Is Waiting To Go To School

Shares
Shares
Share on whatsapp
I always felt that I my life was especially blessed. My wonderful family - my husband and three children were happy. We had a roof over our heads and have a hand-to-mouth existence but our house is filled with happiness, and our needs are small. My children are my world. Now I feel my world has fallen apart and I have nothing to hold on.

Dhanush is my youngest son, he is just 6-years-old and is the angel of our family. He is the baby of the house. He likes to play with his two sisters Yashaswini (12) and Dhanayasree (7). He was studying in kindergarten and was waiting to start class 1. He told us he had become a 'big boy'.

That evening they were playing outside, when his sisters came rushing to me and said that he was bleeding. I ran to him thinking he had fallen. But when I saw him - I froze. His nose was gushing blood. I made him lie down and I cleaned it. Slowly, I became hysterical. I couldn't stop the bleeding, I didn't know why this was happening. I rushed him to hospital.

He was asking me why his nose was bleeding. Just like him, I knew nothing. By the time I reached the hospital, he was unconscious. Doctors took him to the ICU and started tests. It was the most distressing moment of my life. I was yet to come out of the shock and what doctors me was more terrible than what I imagined.

Doctors said Dhanush had a rare clotting disorder and the bleeding had caused extreme low bp, putting him in a coma, respiratory distress, and shock. I almost collapsed. I couldn't believe what I heard. My cheerful son who was absolutely fine a few hours before was fighting for his life.

He has been in and out of ICU in the last one week. His bleeding would stop for two days and it would start again. In the last 10 days, he has recovered 4 times. This is worse than a nightmare. I have always taken care of my children well and made sure that they are healthy. I can't even bear if they have a fever, and now, he's bleeding profusely.

My son has to be in the hospital until the bleeding is regulated and he recovers completely. I don't know how long it is going to take. I'm willing to do anything to save him. All I want is for him to be healthy. He is asking about his sisters, he is missing home. His sisters ask for him too. They are all too young to understand what is happening.


He was always cheerful but now this bleeding has left him exhausted. He is not able to eat. He is fed through tubes. It is so painful to see him in this condition. He has so many questions and I don't have an answer for anything. He asks me why I'm not sending him to school. He sets his school bag and likes to put food in his new lunch box. He doesn't understand that his health doesn't permit him to step out of the hospital.

My husband works for a small company for a meager income. In the last few days we have spent Rs 3 lakhs. We borrowed money from our friends and family. The thought of not having money for his treatment puts me in unbearable pain.


Despite all this pain and shock, my son's eyes are filled with dreams. He is longing to go to school, play with his sisters and be normal like any other kids of his age. I can't bear if he loses his hope! I can't bear to see my son feeling sad and depressed at this age! Before fear and sorrow creeps in, I have to take my son to home.

Doctors say Dhanush has a good chance of recovery if he is given treatment. I'm watching my son helplessly at the moment. I need Rs 3 lakhs for treatment. My son deserves a life. Only with your support, can he live a normal life. Your contribution can give him a chance to live! 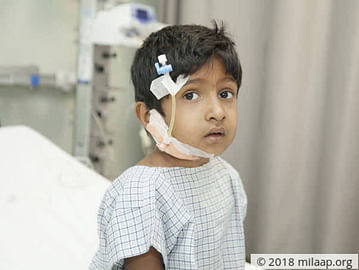 6-year-old Dhanush is suffering from a life-threatening condition

He bleeds profusely from his nose. He needs treatment to recover completely. Please support him.