Gift This Little Baby Boy The Ability To Hear And Speak, And Save Him From An Eternity Of Silence | Milaap
loans added to your basket
Total : 0
Pay Now

R
You are sending a message to
Ravish
Go back

Gift This Little Baby Boy The Ability To Hear And Speak, And Save Him From An Eternity Of Silence

Shares
Shares
Share on whatsapp
Imagine talking to your baby for months and waiting to hear him say his first words only to realize that he never even heard you.
Nuthan is a two-and-half-year-old toddler with a hearing disability that has left him completely deaf in one ear, and almost deaf in the other. His parents are extremely worried about his future as it has affected his development such as speech and cognition. He needs a cochlear implant at the earliest to have any chance at normal life as he grows in this world.

Denial is the first stage of grief

To Ravishankar and Jayalakshmamma, their son Nuthan was a gift. In a small village near Tumkur, Ravishankar has a tiny piece of land where he grows areca nut trees. His livelihood is literally dependent upon the fruits of his labor on this plot, which is often affected by the fickle monsoons. While Jayalakshmamma takes care of the household that includes Ravishankar’s parents and brothers, she also cares for her own parents, and four sisters. The parents did not shy away from the responsibilities when Nuthan was born. They welcomed him with open arms, and were happier than ever. His development puzzled them through the first few months. “He did not respond much when we used to talk to him or call him. He never started walking. Usually, other children do by the time they are one year old.”
Friends and relatives noted something odd about Nuthan and suggested that he may be hearing impaired. “We always shrugged it off. I said there was no way he could have anything like that; he looks perfectly fine. I never wanted to believe it.” As an effort to convince them, relatives coaxed the parents to take Nuthan for an examination at a hospital in Mysore. A doctor tested him and diagnosed him with a hearing disability. “I still did not want to believe him. I said he was lying and brought him to Bangalore instead.”

The final stage of acceptance

Finally, after several consults, Ravishankar accepted the diagnosis that broke his heart. Nuthan had not heard a sound since birth. He was not like other children in their neighborhood. He needed a hearing aid now, as he was 90% deaf in one ear as opposed to completely deaf in the other. Desperate to do anything that could help their son experience the world the way they do, these parents arranged for Rs.70,000 immediately, and Nuthan got a hearing aid followed by therapy for a few months. Unfortunately, he did not respond well to this treatment. His speech did not improve, neither did his hearing. “He would get extremely irritated and throw away the machine.”
The doctors advised Ravishankar to opt for a cochlear implant for the other ear as a curative treatment. Speech development begins at a very early age when babies begin to mimic sounds they hear around them. It is best if Nuthan gets this implant before he turns 3 years of age, as the chances of him learning to speak would go down with age. Nuthan would also need audio and speech therapy for six months to one year after he gets his implant.

Currently, with his socioeconomic status, Ravishankar cannot afford much for this surgery. He has applied and received Rs. 3 lakhs from the PM fund, and is still trying to arrange for the rest. The estimated cost for this procedure is Rs. 10,00,000, and this family requires your goodwill to present their child with the gift of hearing and speech.
“We live with so many people, and still there is nobody to help us out. He is so tiny and he is not able to experience this world the way we do. Even if we try to teach him words, he looks at our lips, acts like he wants to mimic. All he says now is Amma… Amma… Amma…” says his father welling up with tears.
Your contribution can gift this little one the ability to hear and speak.
Donate now. 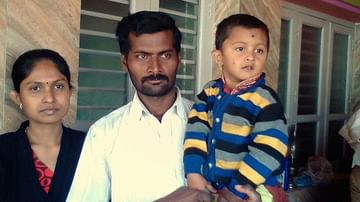 This family is struggling hard to pool funds for surgery that can help their son hear and speak.