“Every day my son used to wait behind the doors to scare me when I would come back home in the evening, the laughter, hugs and kisses that followed meant the world to me. Now when I come home after a long day of work, my child no longer greets me. Instead, I find him crying with pain. He can hardly sit up. The tumour in his brain is slowly killing him.” - Yobu, father

For one long month, this 2-year-old was unable to breathe through his nose

“Two months ago, my son who was healthy and active turned weak with fever, cold and cough. I took him to the local doctors many times in my village but his condition only got worse and he started breathing from his mouth instead. I took him to Raichur thinking better medicines can cure him. But when we were told that he had a tumour in his nostrils and it is life threatening, I was shocked. I took all my savings and rushed to Bengaluru to save my son,” - Yobu.

A month ago, he underwent a surgery but only a part of the tumour which was in the nose was removed. The other half which is in the brain couldn’t be removed as there was a high risk of brain infection. Intense chemotherapy for 10 months can help Jhanson get rid of the tumour in his brain.

“The moment he sees the hospital he starts weeping. He is scared of painful injections. He frequently touches his head and nose saying 'noppi' (pain). We try to calm him down by showing him toys but nothing can make him feel better." - Pushpa, mother

Baby Jhanson before the diagnosis

"We live in Kothadoddi, a small village in Raichur district. Whenever a snack vendor visited our village, like every kid my son also would run behind the vehicle when he heard the whistle. He always bought two packets of the snacks so that he can share with his friends. Now when he hears the whistle, he points to the door telling me to buy the snacks, but I’m forced to restrict him to his diet - home food. He cries and begs me at times, but I am helpless. It hurts to take away this joy from him,” - Pushpa.

These parents cannot afford the treatment that can save their son

Yobu and Pushpa are daily wage labourers who work on other's farms and earn only Rs 400 a day together. Pushpa has been unable to go to work since the day Baby Jhanson fell sick. Running the house only with Yobu's earnings has become difficult. Every week they borrow money from the villagers to go to Bangalore for their son's treatment. Now they have no one left to turn to for help.


“My baby has undergone chemotherapy only three times in last three weeks. There are 10 months of treatment ahead and we don't even have the means to afford next week's chemotherapy. Without continuous treatment the tumour can spread further and kill my son. We need 8 lakhs to save him, please help,” - Yobu.

Your kind contribution can save Baby Jhanson's life 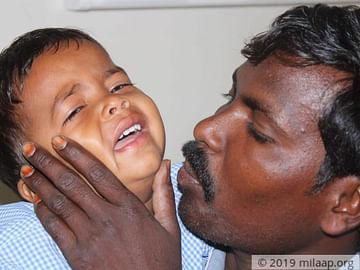 Baby Jhanson can only survive with chemotherapy.