From Kanpur to USA: This small-town boy proved that dreams have no limits. | Milaap
loans added to your basket
Total : 0
Pay Now

You are sending a message to
Avanti
Go back

From Kanpur to USA: This small-town boy proved that dreams have no limits.

Seated before a computer with bated breath,17-year-old Ayush Sharma awaited,his eyes fixed on the screen. The Massachusetts Institute of Technology (MIT) website would announce its admission results any minute now. Seconds later,he let out a loud shriek of excitement that alarmed his mother. Life,which looked blurred a moment ago, would now turn clearer ,brighter. Ayush had been accepted to the MIT Undergraduate Program's class of 2019 with a full tuition scholarship: an opportunity that will let him study at one of America's top universities. 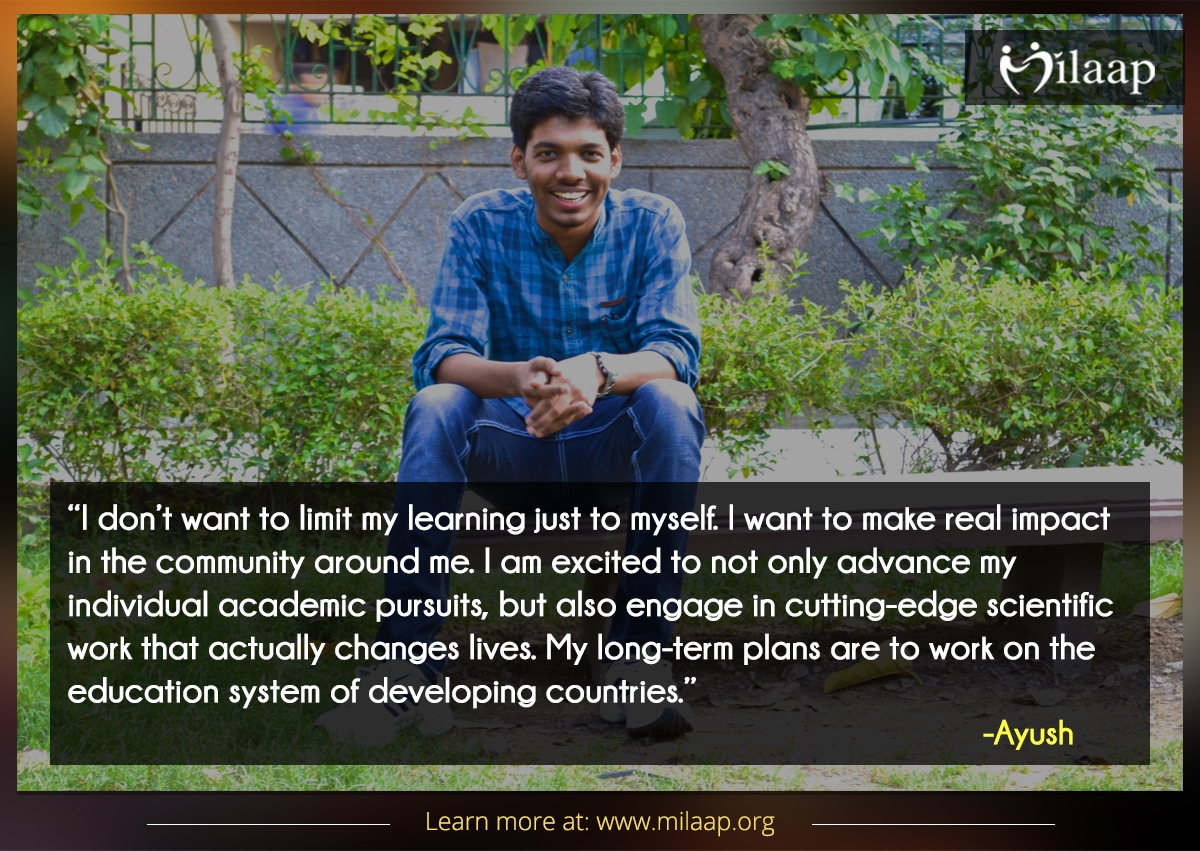 Determined to realize his dreams,Ayush enrolled at Avanti Learning Centres, studying under their guidance since 2013.Avanti is an award-winning education company run by IIT alumni that provides affordable IIT-JEE and science and math test-prep classes across India. Ayush is among Avanti's first group of students who have applied and been accepted to MIT and other prestigious universities.

Ayush found it difficult to master English as a consequence of his modest small-town background. But he didn't let this stop him from applying for Yale University’s prestigious Global Scholars Program in 2014, where Ayush secured a full tuition waiver.

“When I first assessed Ayush for our 'study abroad' program, I was not sure he would be able to cope. His communication skills needed work,and there was little precedence of lower middle-class Indian students qualifying for programs at the top US schools,"says Taylor Gregoire-Wright, a Yale graduate who leads Avanti’s foreign applications program.But Ayush succeeded, and he came back from Yale fully transformed. With improved communications skills and confidence to articulate his thoughts, Ayush was ready to aspire for more.

The Journey to MIT

With a renewed determination after his Yale experience, Ayush decided to try for a degree from the top US colleges. He balanced his SAT and IIT-JEE preparations, excelling at both. His sheer grit helped him score the admission to MIT.

However, one last hurdle remains:even though Ayush is on a full tuition scholarship, he needs financial assistance to cover his living and travelling expenses. The cost works out to Rs. 5,00,000 on a tight budget, but is not an amount his parents can fund.

How You Can Help Ayush

Unwilling to see his admission and such immense potential go to waste for want of funds, Avanti is fundraising Ayush's cost of travel and living to help him make it to MIT.Your contributions will help this small-town boy start off on the path to realizing his own potential and his dream of uplifting countless others. We need to raise the funds by the end of April. Every rupee counts!

Click here to learn how you can help Ayush attend MIT