My Wife's Body Has Stopped Responding To Dialysis And Now Only A Kidney Transplant Can Save Her | Milaap
loans added to your basket
Total : 0
Pay Now

A
You are sending a message to
Avishek
Go back

Shares
Shares
Share on whatsapp
Riya. My beautiful, loving wife. When people looked at her, they saw a slim and pretty woman who took care of her health. ‘She must be gifted with genes,’ they would say because Riya could never put on weight no matter what she did. Only we knew, that she was not really healthy. She was always dealing with high blood pressure. It has now put her in the hospital, where she is fighting for her life.

Riya (Mamata Chatterjee) and I got married in 2007. We fell in love after our wedding and started a family with our son, Avishmit, in 2010. BP was always an issue for Riya, so I made sure she took care of herself. Around 2016, things began to change for us. Riya began putting on weight. At first, she thought it was normal, but soon we realized this was something else.

“I came home walking after shopping for groceries. When I tried to take off my shoes they would not come off. My legs and feet were swollen. I was so scared, I screamed for Avishek!”

I was shocked looking at how swollen her limbs had gotten. No matter how hard I tried, I could not help take her shoes off. We had to finally cut the shoes off. Immediately, I took her to our local doctor who recognized the abnormality. We had to get tests done, and while we waited, Riya was on medicines for the edema.

“The swelling was not going away. I could not walk and my stomach ached so bad that I’d throw up. My doctor referred me to a nephrologist. We went to Apollo. We got several opinions, from different specialists. Finally, they said it looked like damaged kidneys, and to confirm, I needed a biopsy.”

They said she cannot survive for long without a kidney transplant

For a month in May, Riya stayed in the hospital. I was apprehensive about the biopsy. She was already in pain, and this test would put her in more pain. So, I chose to go to another hospital. By this time, Riya’s hemoglobin level was down to 5. She needed blood transfusions. Here, the doctor confirmed that she needed a biopsy.

“We came to Vellore finally, with Rs. 2.5 Lakhs in hand. The nephrologist gave me the worst news of my life. I have Stage V chronic kidney disease. Only a transplant can help me survive. I felt my world explode.”

We had everything in place and no donor, now we have a donor but no money

Currently, both of Riya’s kidneys have failed. She needs dialysis every alternate day, and almost every other week, her condition becomes critical. Her body is unable to take dialysis. She ends up having trouble breathing, because her lungs fill up with fluid, and she needs nebulization.

“The date for transplant was not fixed but once we got clearance from all my doctors, we realized we did not have a donor. I was hospitalized for 3 months. Every time I closed my eyes at night, I thought it was going to be the last time I’d see my family.”

Help me save my wife

We ended up losing everything we had on the dialysis and treatment. We spent over Rs. 12 Lakhs in these past months. Now, Riya’s mother has agreed to donate her kidney. It is more than I can ask from a family. At this time, our problem is with funds. Riya is battling death every day. Our son is away from us and worried that he may never get to see his mother again. I need your help to save my loving wife. She does not deserve this much pain.

Your contribution is the miracle we are waiting for to save Riya’s life. 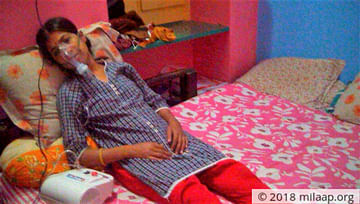 Riya's body is unable to take dialysis anymore and she needs an immediate kidney transplantation.