She’s a Slum Child. And She Is Determined to Win the Football World Cup Title for India | Milaap

She’s a Slum Child. And She Is Determined to Win the Football World Cup Title for India

Shares
Shares
Share on whatsapp
She didn’t let poverty get in the way of her footballing dreams. When she lost her father to alcohol addiction, she didn’t even let that affect her. In fact, that made her a beast of a football player.
Four years ago, under the scorching summer sun, 15-year-old Akansha Shelare played her first match with a team of boys. They jeered at her and the other girls.
“Tum ladkiya kya kheloge,” said one voice.
Akansha’s team lost miserably to them that day. But, today the same boys cheer her on. Akansha and her team will be representing India, this year, at the Homeless Football World Cup in Glasgow. It’s difficult to believe that this 19-year-old learned to play football only four years ago.

The Journey Has Been an Uphill Climb

Growing up in the shanty town of Bokhara in Nagpur, life was never easy for Akansha. Her father died of alcoholism a few years ago, leaving her mother to fend for the children.
Akansha’s mother works as a labourer in a gas cylinder store. Living along with her mother and three sisters, her mother knew she was the brightest amongst her children and will make her proud one day. Having spent her childhood battling the overtures of an alcoholic father had made her crawl into a shell.
Her struggle was one pronged – to play football and get better at it with each passing day. Like the usual stories that we come across where a girl has to fight her family to let her follow her dreams, Akansha’s story was starkly different. In fact, her mother was the first one to tell her that she shouldn’t question her ability to play football just because she’s a girl. So, when Homkant Surandase, the assistant coach of the Indian teams for the Homeless World Cup recognized Akansha’s potential as a goalkeeper, her mother made sure that she didn’t let the opportunity slip by.
“She was very shy and used to rarely talk in the beginning. But, I have seen the transformation in her and how football has helped her find her voice,” says Homkant. 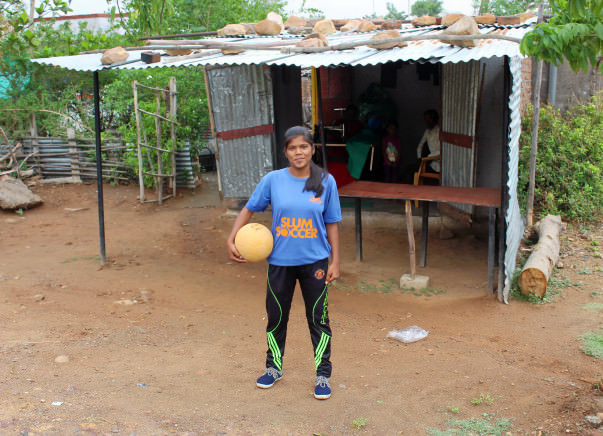 Homkant, a slum soccer kid himself and a son of marginal labourer from Yavatmal, has had a painful childhood and knows how football can act as an escape. He represented India in the 2008 Homeless World Cup.
“Once Akansha opened up to the idea of playing and realized her potential, she progressed steadily and started doing great in matches,” Homkant says.

The Love and Passion for Football

Propelled by her passion for football, Akansha started practicing on the ground for three hours every day. Recently, she also attended a fortnight-long training camp in Chennai.
“I focus on the player, her technique, and the minutest details. That is what helps me perform well as a goalkeeper,” Akansha says.
Having passed her Class XII last year, Akansha is currently devoting all her time to football. “I want to study further. But, at present, I want to focus all my energy on preparing for the Glasgow match. That’s my sole target,” she says.
“Hard work has brought me here. But without my mother and my coach, I wouldn’t have able to play the way I play today,” she says.
Abishek Iyer, the Slum Soccer Communications Lead says, football has been catalytic for Akansha. She was very scared initially but she took a leap of faith and joined us. She always had it in her, he says.
Slum Soccer, a Nagpur-based organization provides opportunities for the disadvantaged kids to express themselves in the field and also select the best players for the Homeless World Cup, an annual football tournament. Teams of homeless people from more than 70 countries get a chance to compete in this tournament.

If you want to see Akansha represent India at the Homeless Football World Cup this year, and make the country proud, we urge you to contribute here. She has the spirit to win and create footballing history but she needs your support. Your contributions will go towards funding Akanksha's tickets and visa for Scotland. Donate here.
Donate 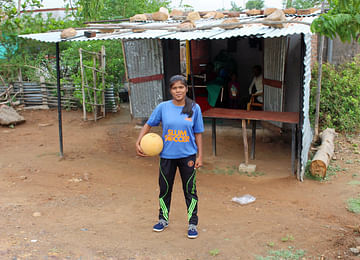