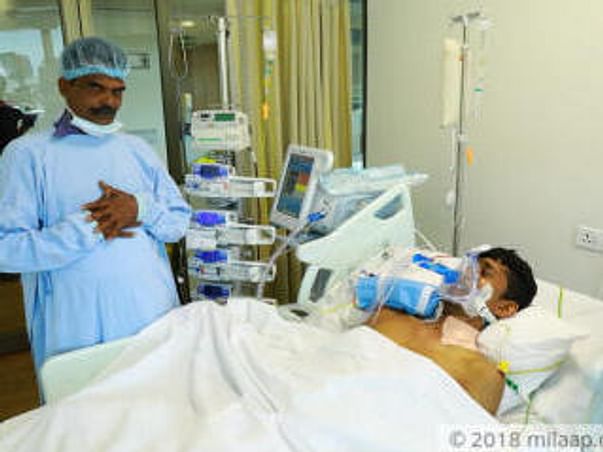 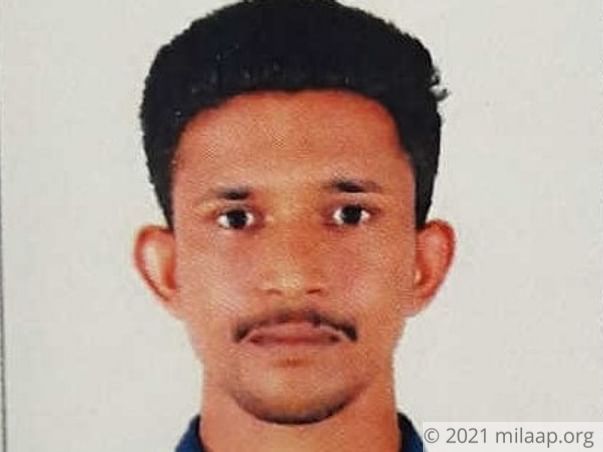 “When we told friends and relatives about Vishnu’s liver disease, the first question they asked us was ‘Does he drink? Does he have any bad habits?’ My heart used to break hearing those things as those who know Vishnu well are aware of what a responsible and diligent young man he is. Our welfare was his first priority –right from childhood, all he worried about was taking care of us in our old age. Now, he is fighting for his life in the ICU and we have nothing to save him.”- Vikraman, father of 24-year-old Vishnu.

Vishnu and parents, before the transplant

Vishnu had just landed his dream job a year ago, but unfortunately couldn’t keep it for long due to his sickness

Vishnu is the first child and only son of Vikraman and Prabha, who hail from Haripad, Kerala. Vikraman, the only breadwinner of his 4-member family (the couple has a younger daughter), made his living as a poor fish seller and earned just enough money to take care of all their needs. Growing up in difficult circumstances, Vishnu wanted to study well so that he could secure a good job one day. But due to his family’s poverty, he could only study till class 12. But he made sure to do a technical engineering diploma, after which he got a job in his hometown. After much effort, his dreams of getting a job in Kochi became a reality last year. But sadly, he started suffering from severe stomach pain from the day he was to join at his new workplace.

“I knew by looking at him turn and toss in pain that this no usual stomach ache. My boy never used to make a big deal about sufferings that he could endure. But this time, he had stopped eating and drinking altogether. No painkiller could ease his pain. More than his physical suffering, he was concerned about the fact that he couldn’t join for duty.”-Vikarman, father.

The poor youngster was diagnosed with a severe liver disease, underwent a transplant after a long wait

Ongoing to many hospitals in Kerala, it was confirmed that Vishnu had acute liver failure and that his liver was a 100% damaged. Over the course of the next few months, his skin had acquired a deep yellow tinge, indicating jaundice. His stomach even bloated abnormally. Doctors told his alarmed parents clearly that their son would not survive for long without an urgent liver transplant. By that time, Vikraman had stopped going to work as he had to accompany his son to hospitals. The family had no income suddenly and was completely dependent on the kindness of the people in their hometown – who were also instrumental in pooling money for Vishnu’s transplant.

“We tried selling our home and land, the only 10 cents of property we own, to gather enough money for his transplant. But buyers bargained for a lesser price that would just not suffice. Months passed and Vishnu’s health deteriorated even further. We were growing weary and anxious when the good people in our town pooled some money for us. That is how his transplant was done early this month.”-Vikraman.

When Vishnu’s transplant was deemed successful, his parents breathed a sigh of relief. They believed that their struggle to see their son alive had not been in vain. But soon afterwards, he started suffering from other problems – there was a build-up of fluid in his lungs. Additionally, the vein that connects the heart and the lung had a build-up of blood which required stenting procedure to drain. He is still in a critical state and needs more days in the ICU to completely recover. However, his father has exhausted all the monetary help that he received from near and dear ones, and cannot continue Vishnu’s treatment anymore. He has pending loans (which he had taken to cover his daughter’s wedding expenses) and finds himself in a position where he will have to take to the streets with his family if immediate help is not received.

Vishnu needs prolonged ICU care to recover from post-transplant complications. He has fought well so far and is only days away from complete recovery, but his father cannot afford his treatment anymore. Buried in debt and currently jobless, Vikraman is struggling to afford the next meal. He has age-related health issues too, which makes his struggle even more difficult.

Your kind contribution can help this aged father save his son