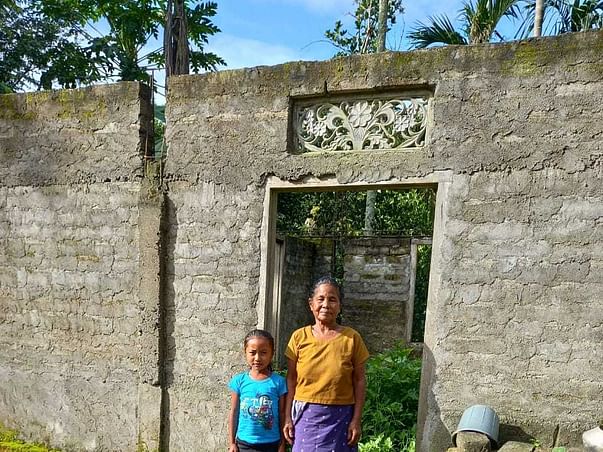 Share
Lt Haling Ch Marak alongwith his family lived in Dinaminggre village under Samanda block of East Garo Hills District, Meghalaya. They had a kuctha house (Hut) and the family being a Below Poverty Line(BPL) one, they received the benefit of Pradhan Mantri Awas Yojana (PMAY) scheme during FY 2016-17. With the instalments received, he was in the process of constructing the house and reached upto linter level.

During that time when the construction of the house was progressing, unfortunately, one day while crossing Simsang river through traditional bamboo hanging bridge, he fell down and got seriously injured. Inspite of all the treatment, he could not recover and remained in a paralysed state. He died eventually in 2019.

His wife Smti Peronni T Sangma lost all their savings in the treatment efforts. No one is there now  in the family with a livelihood after her husband died. Somehow she and her three daughters are making the ends meet. The house that they dreamt of completing together, has been left half done since that unfortunate day.The prices of materials have increased manifold since then. Here in this hilly and remote terrain, the transportation costs are extremely high. The benefit received under PMAY is in no way enough to complete the house. One has to contribute from his/her side. In this case, that option is not there. Hence, this campaign.

My name is Swapnil Tembe and I am the Deputy Commissioner of East Garo Hills District in Meghalaya. I belong to the 2015 batch of Indian Administrative Service (IAS). In my last field visit to this village, I came across their sad story. I have resolved to get their modest House complete and I call for support from all corners. The house needs a minimum amount of Rs 1,00,000  (INR) to be completed. If we raise more, then we will make it even better. Looking forward to helping hands from across the globe!
Utilization Of Funds-
Building Raw Materials- 70% approximate
Labour Charges- 30% approximate