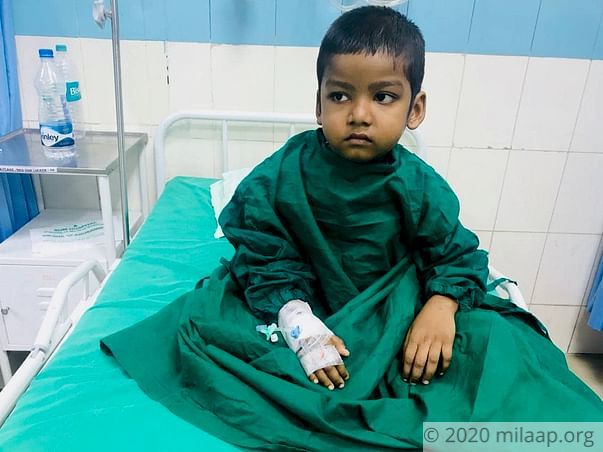 “He hardly sleeps at night nowadays, but whenever he does it’s only for a little while. He wakes up in the middle of the night shouting and screaming that he wants to go back to the village. My little boy’s life revolved around our home, the cattle and his little brother. Now it has become only about medicines and injections, and he cannot bear it. I just wish I can afford to get him treated before his cancer kill him.”-Nutan Jena, father of 5-year-old Phlegon Jena.

In just over a month, lively little Phlegon lost all his energy and vigour due to deadly cancer

Phlegon lived with his parents Nutan, a driver, mother Archana and younger brother, Hedran in a small village in Orissa. He had just started going to school a few months back and was already the class teacher’s pet. Racing back home in the evening after school was something that he looked forward to every day. He was always energetic, both at home and school. But all that changed a month back when he started getting recurrent fevers. His parents took him to many clinics n their village and even the nearest town, where nobody could ascertain the cause of his prolonged sickness. It was finally in a government hospital in Cuttack that he was diagnosed with B-Acute Lymphoblastic Leukemia, a deadly form of blood cancer that affects white blood cells.


Phlegon, before his diagnosis

“When we learnt it was cancer, we did not think twice about rushing him to a good hospital in Bhubaneshwar, seven hours away from our hometown, even though I didn’t have a single paisa in my pocket. He was burning with fever and I just wanted to save his life before it was too late.”-Nutan

Before leaving to the Bhubaneshwar hospital in a last bid to save their elder son’s life, Archana and Nutan had to leave young Hedran in the care of Nutan’s sister in the village. The distraught parents promised the toddler that they would be back home soon, even though they knew very well that may not happen. Phlegon was so weak and famished at that time that he didn’t even realize that his parents had left Hedran behind. He had never been separated from his little brother before this, so it was unbearable for him to deal with the separation.

Phlegon (right) with Hedran and their father Nutan

“Every now and then he asks, ‘Where is Hedran? Why didn’t you bring him’ and we have no answer. I try to lie to him saying he will come the next day, but Phlegon understands that I am lying. He can barely sit up without shaking from high fever, but going back to Hedran and home is all he cares about.”-Archana, with tears in her eyes.

Nutan has no money to start his son’s treatment, needs urgent help to save him

Nutan works as a driver in his hometown, earning as less as Rs 5,000 a month. Ever since Phlegon got sick, he has not been able to go to work as he was always running from one hospital to another to get him the best possible care. Phlegon needs chemotherapy urgently or he will not survive, but his father has already exhausted all the money that he had borrowed from friends and colleagues on his medicines and blood transfusions (that he needed more urgently). With no help in Bhubneshwar, Nutan and Archana are struggling to continue their child’s treatment.

Little Phlegon suffering from acute blood cancer, is currently being treated for high fever, after which he needs to be started on chemotherapy. He will not survive without treatment. His poor father cannot afford to save him.

Your kind contribution can help save Phlegon’s life 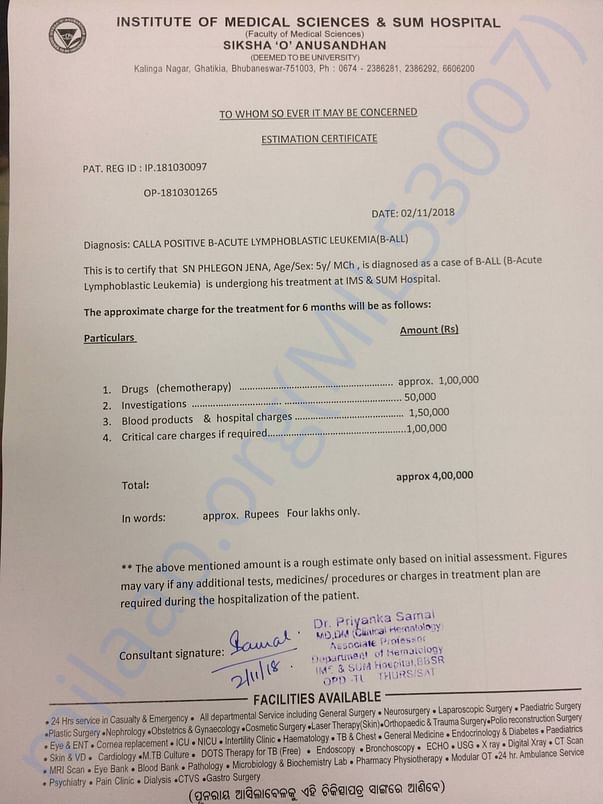 We would like to inform you that S N Phlegon is presently in remission and has completed intensive phases of chemotherapy and is in maintenance oral therapy.

Jena has completed 6 months induction chemotherapy for ALL BFM Protocol . He will soon undergo maintenance chemotherapy  with oral therapy  for 2 years. We shall keep you posted.

Thank you for your love and support. Here is a quick update on Jena's health.

Jena is now undergoing  the second stage of induction chemotherapy. He is responding well to the treatment and there are no major side effects as of now. He is visiting the hospital every three days.

Scan & donate with any app
check_circle_outline Download payment receipt
Report fundraiser
See how thousands are crowdfunding for their causes on Milaap
Rs.147,027 raised

God will bless him. I pray god to cure his disease.

God will bless him. I pray god to cure his disease.

s
You are sending a message to
samalpriyanka80
Go back 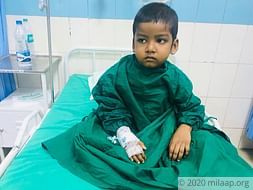