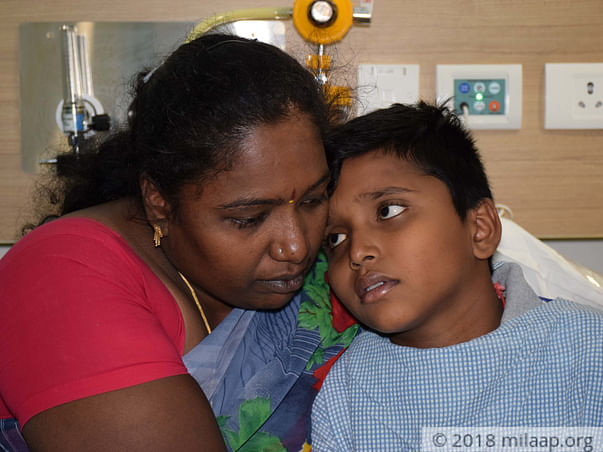 Share
Vijayshree and Mohan live a happy and modest life with their children Shivaji (10) and Kathik (8) at a village in Andhra Pradesh. Vijayshree's world is her children and their happiness and this is exactly the reason why Mohan could not bring himself to tell her that their elder son Shivaji has a cancerous tumor in his chest wall. Mohan has requested doctors and others in hospital not to utter the word cancer in her presence. He has told his wife that he is very weak and he needs blood transfusion till he gains strength. The poor illiterate mother thinks he'll soon recover and she can take him back home from the hospital, but reality is much more scarier than that.

"I was devastated when doctors told that he has a tumor. My wife keeps asking me why he is still in hospital, I keep telling her it is just a viral fever and we can take him back home soon. He sometimes falls short of breath and he can't even say any words. He throws up everything he eats. I dread at the thought of his hair falling down completely after the chemo. Just by looking at him lying in bed my wife cries all the day and she hardly sleeps. I cannot imagine what will happen to her if I say her that he has cancer. It is terrible but I know I have to stay strong for my family." - Mohan, Father of Shivaji.

Shivaji grew up healthy and he never fell sick at all in all these years. One month ago, he got a high fever and cold that did not go away even after a month. Worried parents took him to different hospitals. He was admitted in a local hospital for 10 days but fever did not subside even after taking medicines and injections. They brought him to a hospital in Guntur district.  The scan reports revealed that he has primitive Neuro Ectodermal Tumor, an aggressive cancerous tumor in his chest wall. Only multiple cycles of chemotherapy and radiation can control the disease and prevent it from spreading further.


"He is very sad that he missed so many days in school and his brother is also sad that he cannot play with him. He cannot sit or stand for a long time. He has lost all his energy. My wife's motherly instinct says something is wrong, she keeps asking me whether I'm hiding anything from her but I tell her he'll be fine. Doctors have told that chemo cycles can cure him. He has just completed one cycle and needs it for every 20 days. I'm willing to take any pain but I can't bear to see my son suffering. "- Mohan.

This poor auto driver has no income and has no one to provide moral support, let alone financial help

Mohan is an auto driver. He used to leave early in  the morning and come back late in the night, but he worked so hard for his family without any complaints. He wants his children to be educated in good colleges and get good jobs. He was saving every rupee for their education. Not even in his wildest dreams he thought he had to spend everything to save his son's life. He keeps running back and forth to buy medicines, food and borrow money for the treatment. Mohan is both physically and mentally exhausted.


"I have spent Rs 80,000 so far. I have exhausted all my savings and I  have to borrow money to buy even medicines for him. It has been 2 months since I stopped riding the auto, I have no income now. I can't imagine a life without my son. Our lives will never be the same without him. My son and my wife trust me. They believe all that I say. I have promised them that I'll take him back to home soon but without continuing the treatment his condition will become worse and don't know how long my child can endure the pain. I don't know what I can do to save him."

10-year-old Shivaji , an active and playful boy is now battling for his life. A cancerous tumor in chest wall is threatening his life. He needs multiple cycles of chemotherapy with radiation therapy. Father, an auto driver has not revealed about Shivaji's condition to anyone, not even to his wife. He is struggling all alone with unfathomable guilt and pain. He is desperately waiting for help.