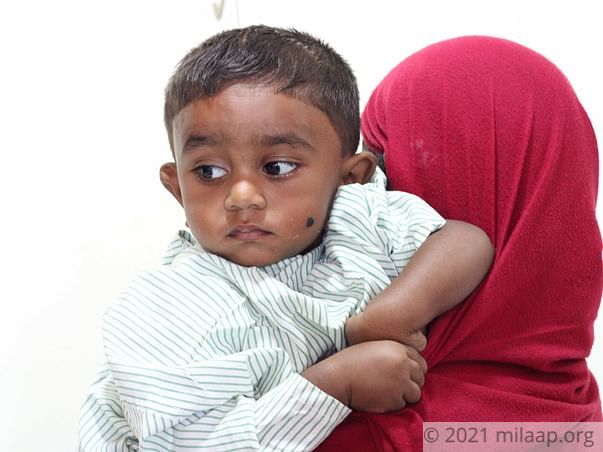 Share
When her 20-day-old baby boy, Sheik Mohammed, started having breathing troubles all of a sudden, Sumaiya Banu blamed her family’s poor living conditions. Their two-room house does not have properly latched doors and windows, and it is easy for dust from the main road to seep in through them. Sumaiya would try holding a cloth to protect her son from the dust and pollution, but even that did not help him – his condition worsened – his crying reached a peak, and with it, so did his breathing trouble.

She left to the doctors’ the next day, in the hope that medicines could make her infant better. To her shock, the doctors gave her the most unexpected news: her baby had a congenital heart disease that would fail his heart without surgery. From that day onwards, Sumaiya and her husband, Thuvan Ali, have been scrambling for funds to make sure that their son’s surgery takes place before his heart fails him; but all their efforts have gone in vain.

‘He plays, eats and sleeps well….but his heart could fail any minute’

Baby Sheik looks and acts like any other bubbly 1-year-old – there is always a smile on his face and he has also started playing on his father’s mobile phone. “But he has not started crawling, let alone standing like other babies,” says Sumaiya, adding, “The doctor says his other developmental milestones too can be hindered because of his failing heart.” But what baffles these worried parents is the fact that their baby eats properly and does not have any trouble sleeping. Breathlessness does not bother him much either, but he has regular medicines that he cannot miss or his condition will worsen.

Sheik has a large hole in his heart that allows mixing of oxygen-rich blood and oxygen-poor blood. A major valve in his heart does not close properly, thereby increasing the chances of heart failure.

This father can only save his son with your help

An auto driver who makes money based on the number of trips he takes, Thuvan Ali is struggling to balance household expenses as well as Sheik’s hospital expenses. Arranging the money for his surgery is completely out of his reach. Added to that, when villagers see Sheik, they are not convinced that the baby has a deadly disease; they say he looks ‘normal’. Thuvan shows them scans and hospital reports, but they do not get convinced easily. He has no way but to depend on crowdfunding for help.