Forced To Stay In A Room All Day, 9-month-old Needs Help To Stay Alive | Milaap

Forced To Stay In A Room All Day, 9-month-old Needs Help To Stay Alive 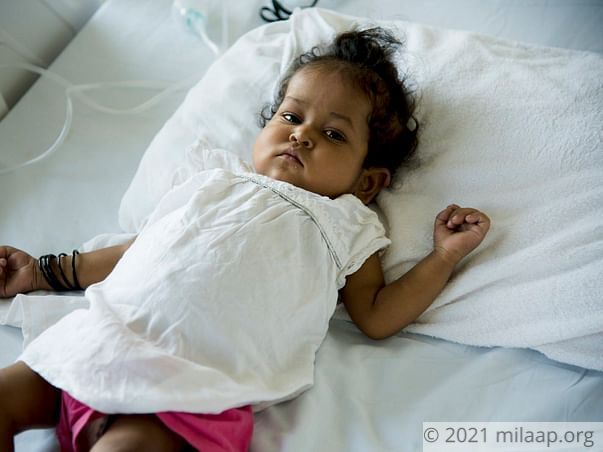 While other mothers in their neighborhood take their babies outside every morning and evening, Roshia can only take Baby Prarthana till the window of the room that they’re not allowed to leave. She points to stray cats as her baby watches eagerly, and if she sees kids calling out to Prarthana, she just waves to them. Roshia wants to invite them inside the house and even let them play with her baby girl, but she knows this can be deadly as Prarthana is suffering from a severe liver disease that has completely compromised her immunity.


“Our baby can catch deadly infections easily now. Due to the risk to her life, we have to keep her isolated in one room of our small house, where nobody else is really allowed to come except me as I am her primary caretaker. All day, she just lies in bed, crying and struggling to even roll over because of her fluid-filled belly. I cannot even take her out for some fresh air due to the severity of her condition,”-Roshia, mother

If it was not for her father’s efforts, this baby would never have been diagnosed

When Baby Prarthana, an ever-smiling and active baby, started getting a yellow tinge in her eyes and passing pasty stools, her father Akhil did what any responsible parent would do – he took her immediately to a doctor in their hometown of Palluruthi in Ernakulam, Kerala. Despite being told many times that it was just a digestion issue, Akhil was not convinced as his baby had started showing signs of distress like crying uncontrollably, and her eyes never stopped being yellow. Finally, after many tests, she was diagnosed with a severe liver disease.

“It was only when she became 6 months old that we got to know that her liver is a 100% damaged. Due to the fear of letting such a small baby go under the knife, we begged and asked the doctors if there was any way that our baby could survive on medicines alone – but he said it was too late,”-Akhil

Every 15 days, Prarthana has to visit the hospital to remove the fluid that gets accumulated in her tummy due to liver failure. As sad as it sounds, it is the only time that this little one gets to see the outside world. She smiles when her mother dresses her in bright frocks and combs her hair. Unlike other kids, she does not cry or flinch when the doctor examines her.


The last time the family went for an outing was for Prarthana's 'choroon' (Hindu ceremony where the baby is fed solid food for the first time) when she was 6 months old.

“Yes, injections do make her uncomfortable but she stops crying within seconds. She likes the hospital environment and responds well to nurses who pull her cheeks or ‘baby talk’ with her. I just wish she can undergo the transplant soon so that she can enjoy the outdoors and grow up like normal children,”-Roshia

This bus conductor does not even have money for pre-transplant tests, needs your help

A liver transplant costing Rs 15 lakhs is the only way his baby can survive, but Akhil does not even have money for the tests that need to be taken before the procedure. His wife, Roshia, is a potential donor but they need Rs 1 lakh to undergo tests to confirm this. Akhil, a bus conductor earning a meagre salary does not even have money for this. Of late, he has also not been able to go to work regularly, which has completely tampered with his family’s life.

“I am at a point where I have to borrow to feed my family three meals a day. My elder daughter Aaradhana’s (5) school fees are pending. I don’t have money for the auto ride to the hospital itself, how will I pay for the tests? My daughter is slowly inching closer to death and I’m helpless,”-Akhil

With your kind contribution, this bus conductor will be able to save his baby girl. 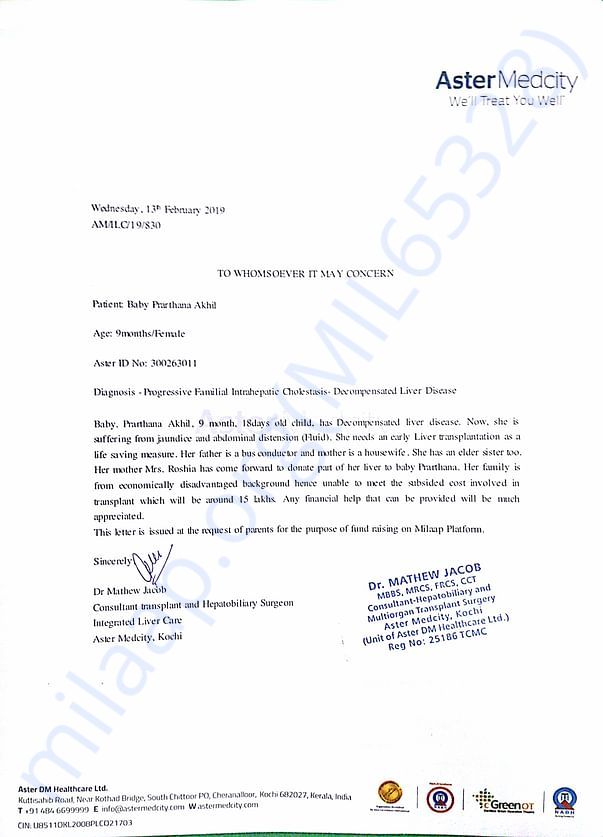 We have some unfortunate news to share with you all today.

Prarthana was moved to the NICU but her condition deteriorated and she could not make it. We pray for her soul to rest in peace.

All the funds raised have been utilized towards her medical expenses.

Thank you for all your support and prayers, Baby Prarthana was dignosed with fever and shes been ill for the past three months. We admitted her the other day as she started developing rashes on her body due to fever. The Doctors where unable to find the reason as to why her fever wasn't subsiding. We had a CT scan done and thankfully the result came out positive. The doctors said they'd want to run some tests this week so that she can diagnose her properly. As of now they've moved her to NICU.

We'll keep you all updated with the progress. Please continue to support Prarthana and remember her in your prayers.

Baby Prarthana underwent the liver transplant surgery and got discharged from the hospital. She is doing well. She is going for routine follow up at hospital as well.

Scan & donate with any app
check_circle_outline Download payment receipt
Report fundraiser
Know someone in need of funds for a medical emergency? Refer to us
Rs.482,202 raised 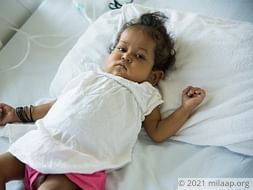 Forced To Stay In A Room All Day, 9-month-old Needs Help To Stay Alive