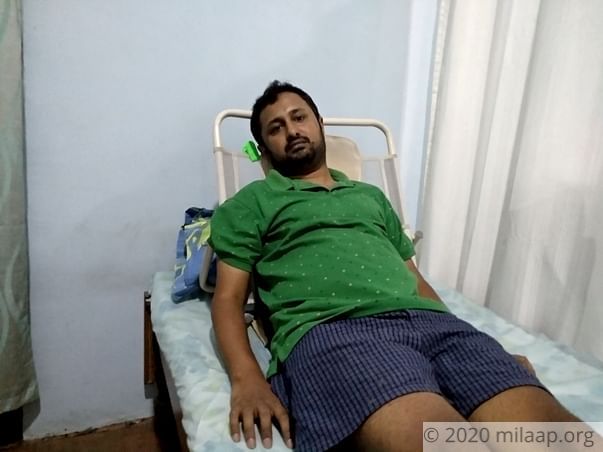 We as doctors see a lot of patients every day, but some cases truly stand out, either because they are unbelievably rare or because of the circumstances and helplessness of the patients. Naveen Kumar is one such patient, who has a rare neurodegenerative disorder that is slowly impairing all his movements.

A rare neurological disorder turned his life upside down

31-year-old Naveen developed Motor Neuron Disease three years ago. Since then his condition has been gradually degenerating. It has come to a point where he can’t move his hands or legs anymore, rendering him unfit even for doing the most basic of things like holding things, going to the toilet etc. He used to work as a cab driver, but had to let go of the job due to his condition.

Naveen used to make nearly Rs 30,000 a month driving cabs. When his disorder took this job away from him, he became completely dependent, both physically and financially on his parents. For a young 31-year-old man, this shift was quite traumatizing. Now his father is the only breadwinner of the family, taking up plumbing jobs to sustain the family and manage the household expenses. This disorder has made Naveen unfit to handle any responsibilities.

His wife is also sick, fighting failure of both kidneys. It is such a desperate situation for the couple. She is not able to support him by working, neither is he able to take care of his sick wife owing his degenerating neuromuscular condition. She is currently staying at her parents’ place, getting treatment. She visits as often as she can to extend moral support to her ailing husband and ageing in-laws.

Due to his condition, he did not just lose movement, he is also gradually losing his ability to speak. Only his parents understand what he is trying to say. His muscles are getting so impaired that he now has immense difficulty in even swallowing food. He is in constant pain and discomfort. The only way to help him is through rehabilitation.

There is hope for his recovery

Naveen’s rehabilitation process includes various aspects like Neuro-physiotherapy, Neuro-occupational therapy and, Speech and Swallowing therapy. Through therapy and rehabilitation, we aim to treat his condition enough to make him as independent and functional as possible. These therapies can restore his body functions and movements enough to sustain him without total dependency on others for simple things.

His rehabilitation has already started and slowly Naveen is making progress. It will take him at least 6-8 months before he can start functioning as an individual again. As of now, he comes to therapy every day for 5-6 hours; his mother brings him here and then takes him back home since he cannot travel on his own.

We aim to make him functional enough to take up simple jobs again. Rehab can help restore his movements in order for him to take up roles like - a cashier, a salesperson in small shops etc, which would not require him to move much. We also need to work on his impaired speech and ease his muscles so that he can at least swallow food.

The financial crunch is hindering his progress

His rehabilitation and therapy will cost about Rs 7.2 lakhs, which is an extremely high amount considering the financial turmoil his family is going through. But this therapy is the only way he has, that can give him a life close to normalcy. It kills him from within that he is so dependant on his parents.

In order for him to get better, rehab and therapy are inevitable. But for that, he needs your help since it is way out of their affordability. Your contributions can make his life easier to tolerate.

Please help us save Naveen. 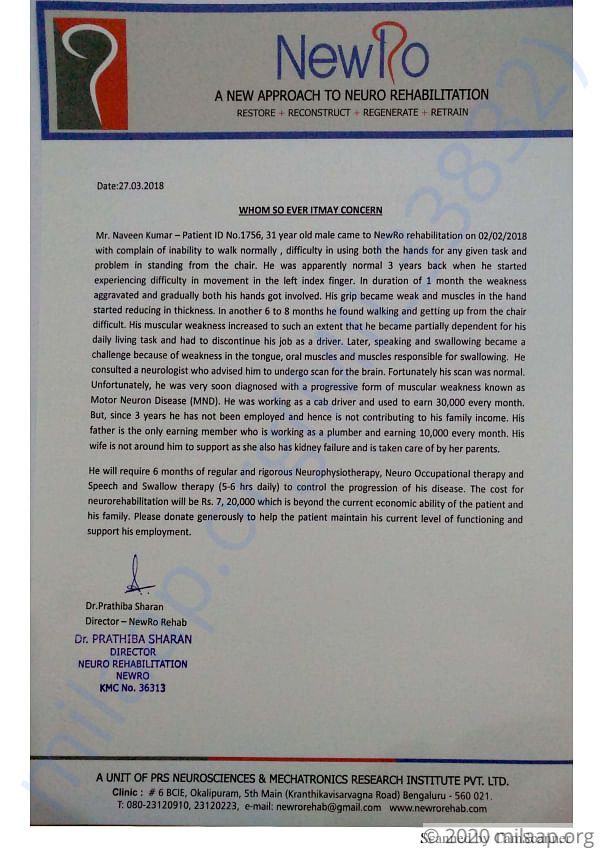 Report fundraiser
See how thousands are crowdfunding for their causes on Milaap
Rs.4,140 raised

Donated to this campaign via Paytm? Click here if you can’t find your donation listed below.
A
Anonymous donated Rs.90

Donated to this campaign via Paytm? Click here if you can’t find your donation listed below.
A
Anonymous donated Rs.90

You are sending a message to
Dr. Prathiba Sharan
Go back 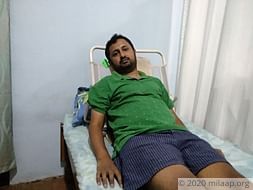