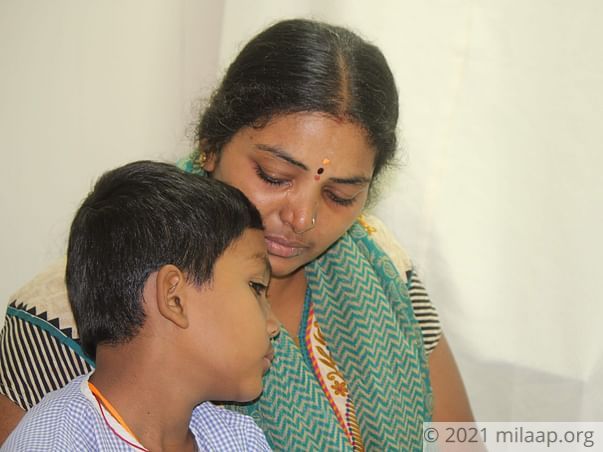 “My son has stopped talking. To me, and to anyone else. He does not ask for food. He does not complain about pain, even though I know his body is torturing him inside. He knows he has cancer again. He is terrified, I can feel it. I am not able to do anything. Especially because we cannot even afford consultation charges at the hospital."

Nandan fought cancer before and won, but that was not the end

9-year-old Nandan found new hope after fighting blood cancer for nearly 2.5 years. Sujatha and Suresh were happy watching their son leading a normal again but the joy did not last long for this family. His cancer relapsed.

“I was giving him a bath when I noticed that his testicles were swollen. The doctor had warned us that his cancer might relapse, to look for signs of lumps. This was it. We could not wait. We immediately took him back to the hospital. It did not take long before our worst fears were confirmed. He has cancer, again. He is fighting death, again." - Sujatha

Despite the grim situation, Nandan can beat the disease this time as well if he gets immediate treatment. Testicular relapse in ALL is very rare. However, it is possible to cure it with the right treatment if they start early. Nandan's parents have been unable to gather funds even for an out-patient consultation. This caused a delay in follow-ups. Now, with time running out, his condition is bordering criticality.

“Nandan is getting very weak. He cries for hours. He pushes us away if we try to console him. He only interacts with his brothers by playing games. Even then, his brothers noticed that Nandan is silent, withdrawn and always thinking."

The desperate father is left penniless

Suresh is a snacks vendor who strives to run his family on an income of Rs 7000/month. He lost all his savings in the 2.5 years that Nandan was fighting cancer. He had to start from scratch, and was living from paycheck-to-paycheck while this diagnosis hit them. Without even Rs. 5 in his pocket, Suresh is now dependent on his relatives for even food.

"We had to admit Nandan to the hospital today. His condition is so critical that he needs to start the treatment right away. It is an emergency and I feel helpless that I cannot even buy him food or medicines. The hospital is kind to us. They have waived so many fees. They will start treating Nandan immediately. What I need is help to fund his chemotherapy."

Even a day's delay could possibly be fatal for Nandan. The window is small, and starting chemotherapy can give him enough time to beat the disease. Suresh is begging everyone who walks by for help. Unfortunately, he is unable to fund Rs. 14 lakhs on such short notice.

Nandan is terrified of what may happen. Your contribution can save this little boy from cancer.