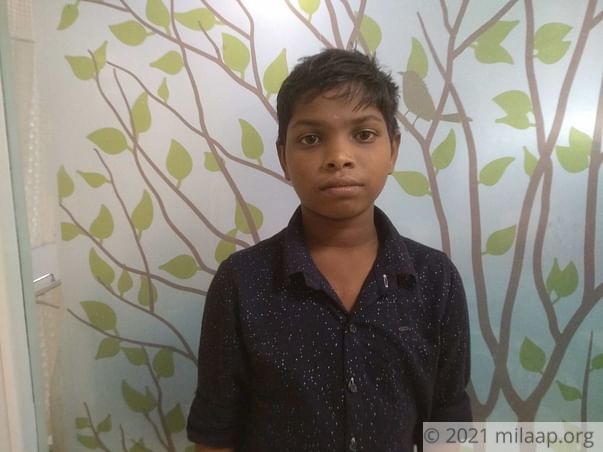 Share
Magesh’s life once revolved around grazing cattle and playing hide-and-seek with his younger twin siblings, Ram and Lakshman. He’d had breathing trouble all his life due to a severe heart disease, but from last month it has gotten far worse. Now, he is unable to go anywhere outdoors, let alone school as he runs out of breath after just a few steps. He needs an urgent surgery to go back to being normal again, but his poor parents cannot afford it.


“Every day, he wakes up early in the morning and asks me ‘I feel better today. Can I go back to school? I will miss all my lessons otherwise and lag behind other students. Please, please can I go?’ My poor boy cannot even stand up properly, but he still musters the energy to tell me this.”-Rajeshwari, mother.

Despite undergoing a surgery 4 years ago, Magesh is in danger as his heart condition has still not improved

Magesh was born seemingly healthy, but after 6 months he started getting very sick – he had difficulty feeding and would occasionally throw up milk. His parents, Thulasidas and Rajeshwari took him to the hospital thinking it would be just a normal gas problem, but as it turned out, their baby was diagnosed with Tricuspid Regurgitation, a severe heart disease where the valve between the two right chambers of the heart doesn’t close properly, allowing deoxygenated blood to flow back to the heart’s upper chamber. This led to very poor levels of oxygen circulation in his body, for which the doctors suggested surgery to place a shunt in his heart to aid flow of deoxygenated blood properly to the lungs for oxygenation. But Magesh was able to undergo this surgery only 4 years back due to his family’s poor financial status.

“Thanks to a government scheme, Magesh was able to undergo the surgery that he needed before it was too late. We thought he had gotten better as the breathlessness had reduced significantly and he was growing up to be a healthy kid. But now, it is back with full force and is suffocating him; we fear for his life more than ever.”-Rajeshwari, mother.

This poor boy throws up everything he eats, is becoming weak with every passing day

Besides her son’s severe breathlessness, what alarms Rajeshwari more than anything is that her son now throws up blood along with the food he’s eaten. It started off as an isolated event, but gradually became more frequent. Magesh’s face is also appearing more swollen as days go by, and the poor child has no energy left.  Doctors gave him medicines, but told his family very clearly that only an urgent surgery can help solve his problems permanently.

“He asks me why he is vomiting blood and I tell him that it’s nothing serious. My child believes me, but I know that he is very scared. I don’t allow him to even peek out of the window now as I fear it might cause further harm. He is getting restless and morose, but what choice do I have?”-Rajeshwari.

Being a daily wager, Thulasidas does not have the means to save his son

Thulasidas works as a daily wager in other people’s farms in a small village in Tiruvannamali. He earns a meagre Rs 200 a day, with which he has to feed his family of four. Ever since Magesh’s condition worsened, he has not been able to go to work regularly due to the frequent trips to Chennai (where Magesh is being treated) from Tiruvannamali. He had to borrow a huge amount of money just for these trips, and the tests and scans that Magesh desperately needed at that point of time. Now, this father is left with nothing. He cannot afford to borrow more money from moneylenders anymore as he’s not even paid any of the earlier installments back. He is drowning in debt on one hand and on the other, Magesh is fighting to stay alive due to his bad heart that can fail any moment.

Magesh is suffering from a severe heart disease that hasn’t improved despite him undergoing a surgery for it around 4 years ago. He needs another surgery to allay the chances of sudden heart failure. His parents are too poor to afford the surgery.

Donate
0%
Be the first one to donate
Need Rs.4,00,000
Card, Netbanking, Cheque pickups
Or Donate using