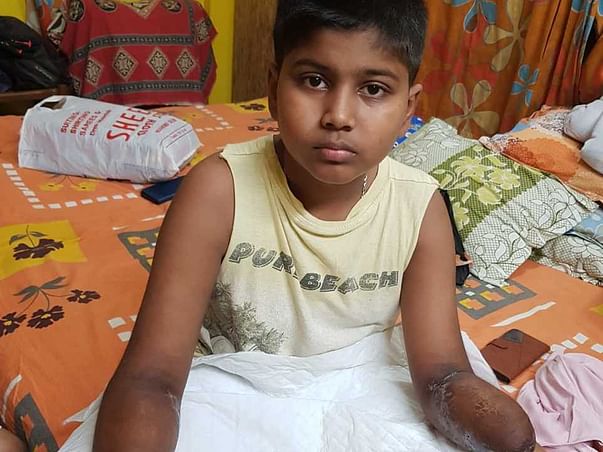 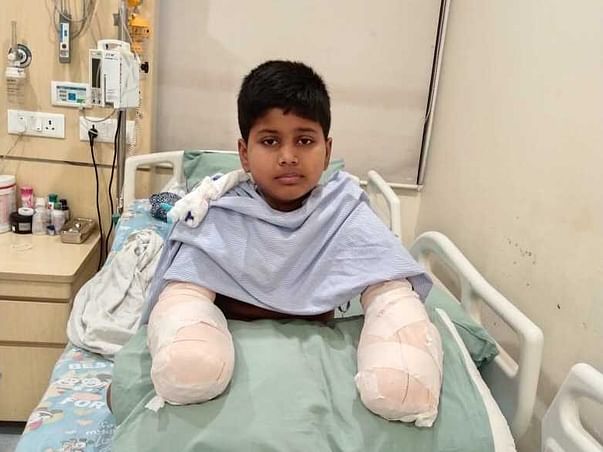 হাতটা কবে কিনে দেবে বাবা ?
“When are you going to get my new hands” a question from a son  to a helpless father…..
He has lost his both  hands, is so simple to say but this 11 years kid is still yet to come to terms. Rather he is praying daily to the God to get back her hands……
Many a time he is trying to hold the color pencil packet, books with his half hands, then often getting dis-balanced while getting up on the bed, his eyes getting wet when he  is not able to work    with half hands . With his half hands on her fore head he  continues praying to the All Mighty, “oh god, please return my hands.”
An unfortunate incident has cost this 11-year-old both his hands. On the 28th feb’21, Kaustubh  was playing outside with his friend when a high-tension wire from an electric pole came in contact with him. A severe electric shock passed through his entire body, causing most damage to his both  hands. Passers-by who saw the entire incident immediately informed Kaustubh  father, Kaushik Sarkar . They immediately rushed him to a Tata Main Hospital , Jamshedpur . According to advised of Tata Main Hospital , Jamshedpur we then took him to AAMRI , Bhubaneswar . In the process of treatment my son lost his both hands .
We did not know if we would see our only child alive. In order to save his life, the doctors had to amputate both his hands. But when he was brought out, although I was grateful to see him alive, I could not believe that he would have to lead the rest of his life without hands”, Kaushik Sarkar, father. Resident of Jamshedpur , India .
According to the advice of doctors, Kaustuv  urgently needs a prosthetic hand ( MYEO ELECTRIC BELOW PROSTHESIS ) for his future life. The cost of which is Rs 6 lakh. Kaushik is working in a small office. So far Rs 7 lakh has been spent for the treatment of the son. In which only Rs 50,000 has been received with the help of the state government, the rest has been taken from friends and relatives for help and loan.
Kaushik's Sarkar ( Father of Kaustuv Sarkar ) financial condition is very bad and it is impossible to collect Rs.6.0 lakh for the artificial hand of the child.
Let’s show Kaustubh  that this world is full of hope, love and smiles.
Regards,
Koushik Ghosh Choudhury