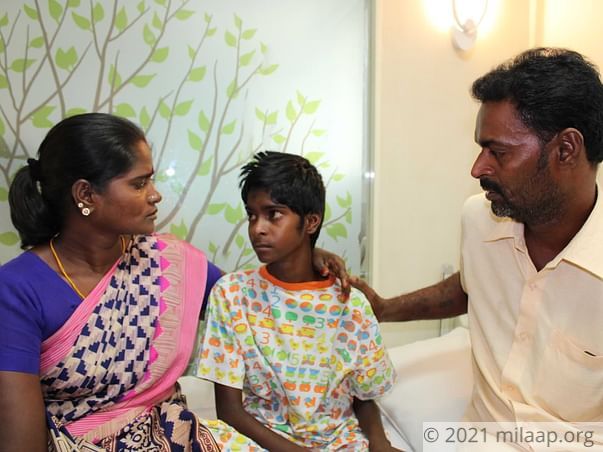 "Just a year ago he had a surgery and he was slowly getting better, but he still couldn't go to school. We had to make sure he took all his medicines on time. We did everything we could, but nothing helped. He is very sick now. He keeps saying that he's fine, but I know he's crying in silence. Sometimes the pain is so much that he says 'Amma why is this happening to me again? What will happen to me?' Sometimes I don't what to say, I fear I will lose him." - Senthamarai, mother.

3 years back, I could not afford Rs 3,500 for the tests - That's the biggest mistake I've made

Deepak was born with holes in his heart and a deformity in the thoracic wall that resulted in him having a funnel-shaped chest. It causes him severe back pain and it affects his cardiac and respiratory functions. His parents were shocked to see him in such a condition but they were told that over the years, it would heal by itself. 4 years ago, he suddenly became weak and did not have the energy for anything. His parents took him to a private hospital but they couldn't afford the tests, so they came home, desperately wishing that it wouldn't be anything serious.


Deepak before his first surgery

"Over the years, his heart murmur became louder day by day. When we took him to the doctors, we were late, immediately a pacemaker was implanted in his heart. Since then I never missed any tests and got him all the medicines. Exactly after a year, his pacemaker got damaged, now he needs an open heart surgery. That is the only solution for his problem" Manimaran

He can't walk or even talk for long without getting tired

Deepak has become extremely weak and he can hardly walk and run like other children. He falls short of breath when he talks for a long time. It has been a year since he went to school, he was confined to his house, He was longing for a normal life but his condition did not allow him to even step out from his house.  He is slipping into depression. He fears death and hardly talks to anyone now.


"I'm not educated, sometimes I feel it's my ignorance that made his condition so severe.  I thought he will be angry with me for that, but he is so kind. He consoles me. I feel very guilty to even face him," - Manimaran

We are struggling to even afford the next meal, how can we afford the surgery?

Manimaran works as a daily wager in Kerala. His family lives in a village in Salem district. He visits his family once in a month and earns around Rs 300 per day. Deepak's mother, Senthamarai works as a daily wager and earns Rs 100- 150 per day. They are struggling to have even 3 square meals now. They have 3 daughters as well to take care of. The eldest daughter Divayadarshini (17), stood first in school in her board exams but now she is forced to look out for a job to support the family.


"Last time, it was through crowdfunding we got the surgery done. We are forever grateful to them. Once again, I'm begging everyone to save my son. Without your help, we'll lose him," - Manimaran