This Baby Cannot Avoid Pain If He Has To Survive, He Needs Your Help | Milaap

This Baby Cannot Avoid Pain If He Has To Survive, He Needs Your Help 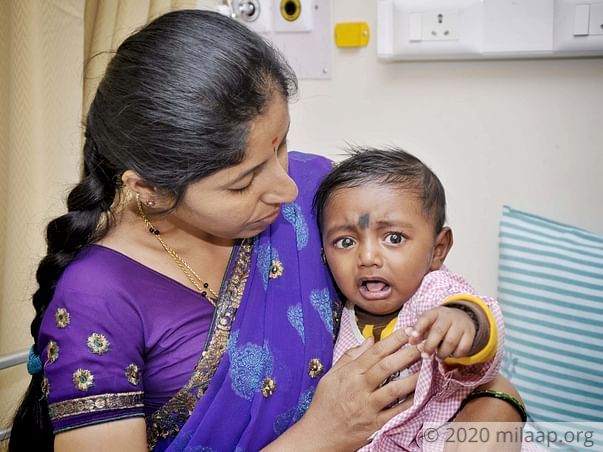 As Sunil carries baby Srinivasa into the hospital, he can feel the little one’s heartbeat get faster and louder. It’s only seconds before he screams and cries – trying to wriggle out of his father’s hold. Baby Sreenivas is only 9-months-old but the smell of the hospital is all too familiar for him. It only reminds him of the painful injections he’ll have to endure later on. This has been baby Srinivasa’s life for the past 6 months – pain, suffering and a number of needles poking his tiny hands.

Baby Srinivasa’s life began in pain. He was born 20 days before the due date, and since he was underweight, he had to stay in the NICU for a week. When he was discharged, Sunil and Nethravathi thought the worst was behind them. “Our daughter was so happy when we took him home. She said she will take care of him herself.” – their happiness was tragically short-lived.

Ever since baby Srinivasa was diagnosed with Thalassemia, a blood disease due to which the body has fewer red blood cells and lesser hemoglobin, Sunil and Nethravathi have been looking for ways to lessen his pain.

“He was only 3-months-old when we found out. We had just taken him for a regular check up in Tumkur after he vomited milk one day. We thought it wouldn’t be anything serious. We had never heard of the disease before this. Luckily someone told us about Narayana Hrudayalaya. There they told us he can be saved with a bone marrow transplant.” - Sunil

‘We see so much suffering around us every day’

Sunil and Nethravathi soon realized that just like their baby, many other children also suffered from similar, if not the same blood disease. They often talk to the parents of the children there, sharing their sorrows and troubles.

“We realized that we’re not the only ones. We also realized that if he gets the transplant now, he can be fully cured of this disease. The parents of one of the older teenagers said that they wish they knew about the disease earlier, he could’ve had a better chance of a cure. We wish he didn’t have this disease, but we’re a little relieved that it was detected early so that he has a chance to beat it.”

Sunil works as a salesman in a small saree shop in Bangalore. He earns Rs. 10,000 per month and has spent nearly 1.5 lakhs so far on his baby’s treatment with the help of the shop’s owner. However, Sunil can’t borrow any more from him. He is the sole breadwinner of the family. He has nothing that he can sell or no one that he can borrow from to afford the 34 lakhs needed for baby Srinivasa’s bone marrow transplant. Baby Srinivasa needs your help before it’s too late. With a little support from us, baby Srinivasa won’t have to go through the painful blood transfusions anymore.

Your support can give baby Srinivasa a healthy life. 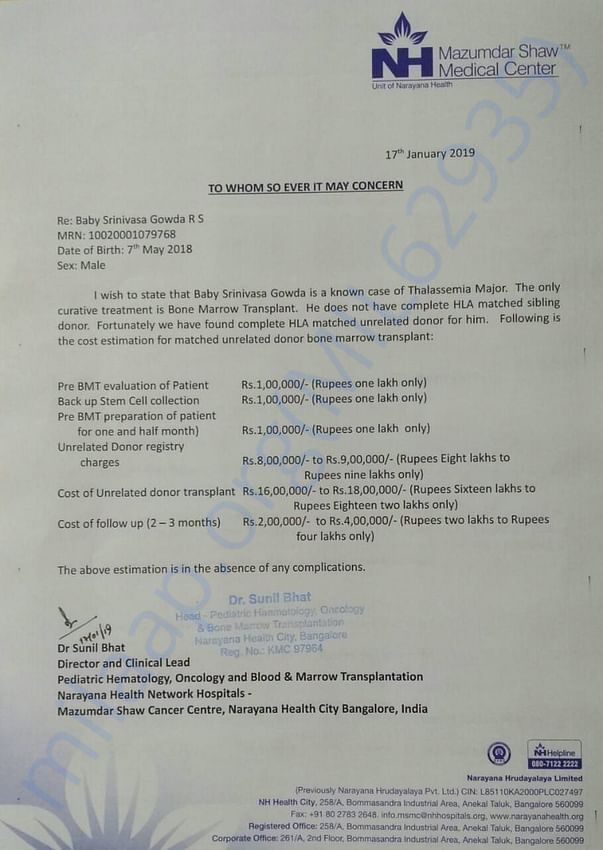 Ask for an update
Donated to this campaign via Paytm or bank transfer? Click here if you have not received an email confirmation from Milaap.
Baby Srinivasa Gowda R S is doing well. came for followup checkup
Dear Supporters,

Baby Srinivasa was admitted in the hospital for packed cell transfusion. He tolerated the transfusion well and is being discharged in a stable condition.

Baby Srinivasa Gowda R S is diagnosed with Thalassemia Major. Presently he is admitted for packed cell transfusion. He tolerated the transfusion well and is being discharged in a stable condition.

Scan & donate with any app
check_circle_outline Download payment receipt
Report fundraiser
See how thousands are crowdfunding for their causes on Milaap
Rs.52,630 raised 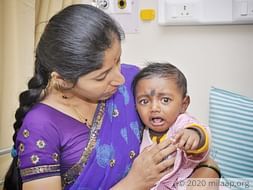 This Baby Cannot Avoid Pain If He Has To Survive, He Needs Your Help