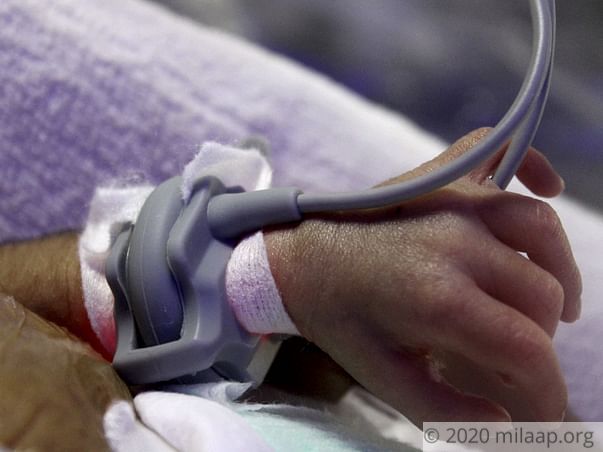 A month ago, Mastan Babu had never left his home without a smile on his face. He had a decent job, a loving wife and a baby on the way. An ordinary call centre employee who worked late-night shifts, he had been saving up every paisa for the arrival of his little angel. He had been so well-prepared and believed strongly that money would never be a problem to cover hospital expenses for his wife’s delivery. But life changed within a matter of days when his wife, Parvathi, fell terribly sick and had to give birth to their baby boy well before the due date. After spending all the money he had been saving up for his wife’s hospitalization, Mastan Babu is left with nothing to save their premature baby who will not survive without prolonged intensive care.

Mastan and Parvathi, during happier times

Parvathi developed fever and breathing problems at 7 months of pregnancy which got worse over time, resulting in premature delivery

Mastan had not left any stone unturned in taking care of Parvathi when she announced her pregnancy – he made sure to take her to a good hospital and even reminded her regularly to take her prenatal vitamins. After all, they had been married for more than 2 years and had always wanted to become parents. But one day, Parvathi developed a high fever that began accompanied by severe breathing difficulty in the next few days. Her condition became so worse that she had to be admitted in a hospital for almost 10 days in intensive care – her lungs had grown larger in size due to the respiratory infection she was suffering, and pushed against her tummy. This constricted the space for the growing baby and due to a heightened risk of a blood infection that could pass on to the foetus, doctors had no choice than to do an emergency C-section.


“My wife had become unrecognizable due to her health issues – she had lost more than 12 kgs in a month! Even when she was suffering so much, she was only worried about our baby. After her delivery, she kept asking to see him even when she could hardly get up from bed. It was difficult to tell her that our baby was alive, but just barely.”-Mastan, with tears in his eyes.

Their baby boy was born unequipped to deal with the world outside his mother’s womb, needs prolonged treatment to survive

Mastan and Parvathi’s premature baby boy was born palm-sized, weighing just 1.3 kg and with extreme breathing difficulty at 29 weeks of pregnancy. He was placed in a glass box from the second he came into the world, with specialized tubes attached to his face for feeding and breathing. Mastan had to be satisfied watching him from a distance, fighting the strong urge to hold his son and cry happy tears. As Parvathi had major health issues, she couldn’t meet her son for many days after his birth. She did not produce breastmilk and the baby had to be formula-fed from day 1. The little fighter has good chances of turning into a happy and healthy infant if he gets prolonged treatment in the NICU (neonatal intensive care).

As he spent everything on his wife’s treatment, Mastan has nothing left to save his son now

Mastan used to earn a modest income working in a Hyderabad call-centre and had some savings that he had intended to use for his wife’s delivery. But as fate would have it, Parvathi had to spend many days in hospital due to her fever and subsequent blood infection, and he had to give away all his money to save her. He has spent more than Rs 4.5 lakhs till now. He has no way to save his baby – he had to borrow more than Rs 1 lakh to keep his baby’s treatment going in the hospital till now. After taking leave from work for two weeks, he is now forced to go back or risk losing his only source of income. But he has nobody else to take care of his wife (who was recently discharged) and his baby, and finds himself helpless financially and emotionally.

Parvathi and Mastan’s premature baby boy is struggling to breathe and feed on his own – he cannot do either without support now. Parvathi is only recovering from a set of health complications that caused her early delivery. Mastan is helpless as he has to take care of both his ailing wife and son, with no help.

Your kind contribution can help this father save his premature baby boy.

UPI: rzpy.givetomlpbabyofpa004@hdfcbank (Copy to clipboard)
Or
Click here to read the instructions before you make a bank transfer. 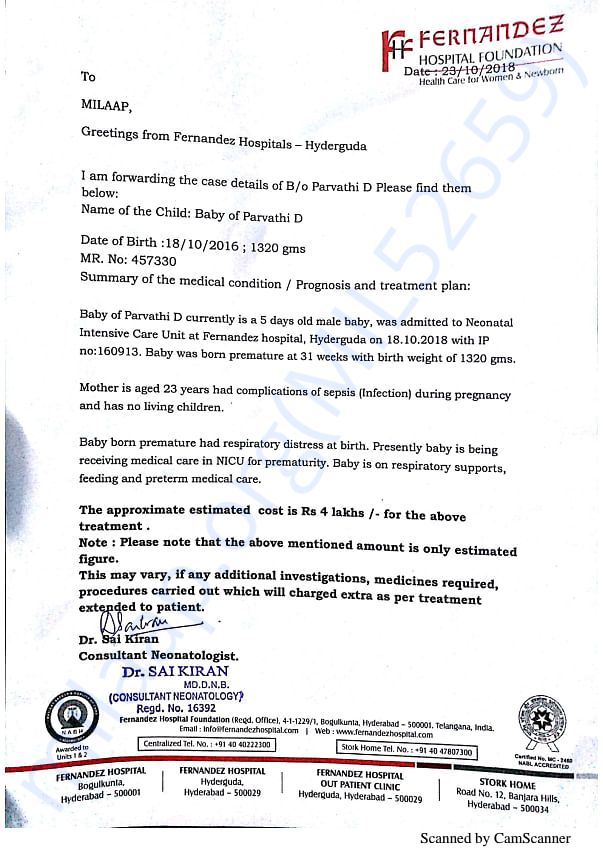 UPI: rzpy.givetomlpbabyofpa004@hdfcbank (Copy to clipboard)
Or
Click here to read the instructions before you make a bank transfer.

The baby has been discharged from the hospital and is doing well. Baby is advised to come on regular follow ups. We shall keep you posted.

Report fundraiser
See how thousands are crowdfunding for their causes on Milaap
Rs.46,938 raised

May the child and mother be blessed with health

May the child and mother be blessed with health 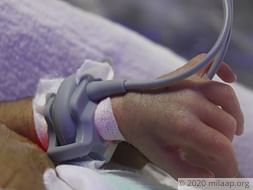