Despite Selling His Auto, Father Struggles To Save Child From Cancer | Milaap

Despite Selling His Auto, Father Struggles To Save Child From Cancer 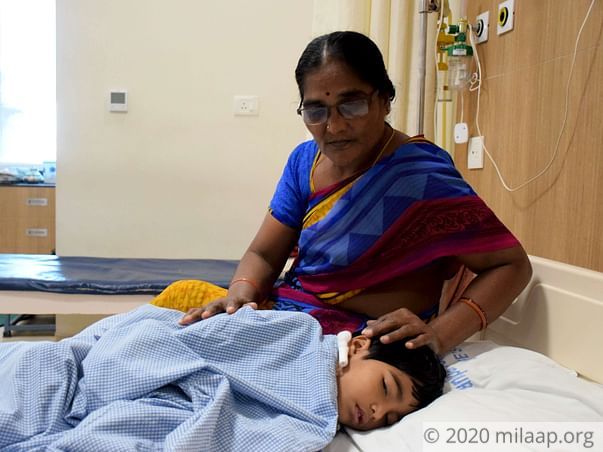 Every time little Lasya came back home from school, she brought with her a bright smile and an endless number of stories. She would wait up till her father, Narasimha, got home from work, and would fall asleep only to the sound of his voice singing to her. There’s nothing that makes Narasimha happier than his daughter’s beautiful smile, especially after a long day of driving his auto. But now, as Narasimha sits by Lasya’s bed trying to comfort her, pressing her aching legs and telling her she’ll be fine soon – he wonders if he’ll ever see her smile again. Cancer has made little Lasya extremely weak. She barely eats now and her active, playful days are long gone. Lasya needs to start chemotherapy immediately to beat cancer, but even after selling his auto, Narasimha is struggling to start her treatment.

Lasya endures the pain of cancer quietly, but her fight has just begun – she needs chemotherapy to survive

It all began one month ago when Lasya came back home feeling rather tired. Her mother, Pavani, was surprised to find her so dull and made her favourite juice to cheer her up. But Lasya’s fatigue soon turned into a raging fever. For 5 days, she was on medication with no improvement. Her limbs began to hurt even more, and her parents struggled to help her. However, two weeks after, Lasya was diagnosed with blood cancer – a disease her parents had only seen and heard of in movies. They never imagined that one day, it would be their reality.

Lasya is terrified of needles, but she rarely cries or shows her fear. She just holds her parent's hand tight and endures the pain, hoping that this will be her last visit to the hospital. However, Lasya needs chemotherapy for the next four months to fight cancer.  Her fight isn’t over yet.

Her father, an auto driver, left no stone unturned to try and start her treatment – but it’s not enough

On receiving the dreadful news of his daughters’ disease, Narasimha left no stone unturned to try and start her treatment. He begged his relatives and friends for help and managed to borrow 80,000. He even sold his auto that he used to transport goods in. But it’s not enough. Narasimha needs 8 lakhs to afford Lasya’s life-saving treatment.


“I haven’t saved much with my work. I hardly earn Rs. 300 every day, and with that, I feed and take care of my wife and two daughters. I was able to save enough to afford their school fees, but now I can’t even do that. let alone afford the lakhs required for her treatment. I don’t have the means to save my own daughters’ life.”

Lasya wishes to play like she used to and looks at her father with hopeful eyes, eagerly waiting for him to say “you can go to school tomorrow”. But baby Lasya has a monumental hurdle ahead of her – she needs chemotherapy for the next 4 months to beat cancer. Unfortunately, her father is the sole breadwinner of the family and is struggling to save her. You can help Lasya fight the dreadful disease.

Here is an quick update on lasya. She just finished her third and final course of chemotherapy. As of now she is doing well. She will be kept under regular follow up for next 5 years.

Report fundraiser
See how thousands are crowdfunding for their causes on Milaap
Rs.503,964 raised

Dear baby Lasya do not worry, Our god wont leave you, very soon you would be fine.

Dear Lasya, we all pray for your speedy recovery - RAMPS International, Inc Team

Dear baby Lasya do not worry, Our god wont leave you, very soon you would be fine.

Dear Lasya, we all pray for your speedy recovery - RAMPS International, Inc Team 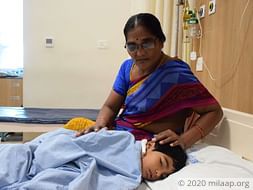 Despite Selling His Auto, Father Struggles To Save Child From Cancer